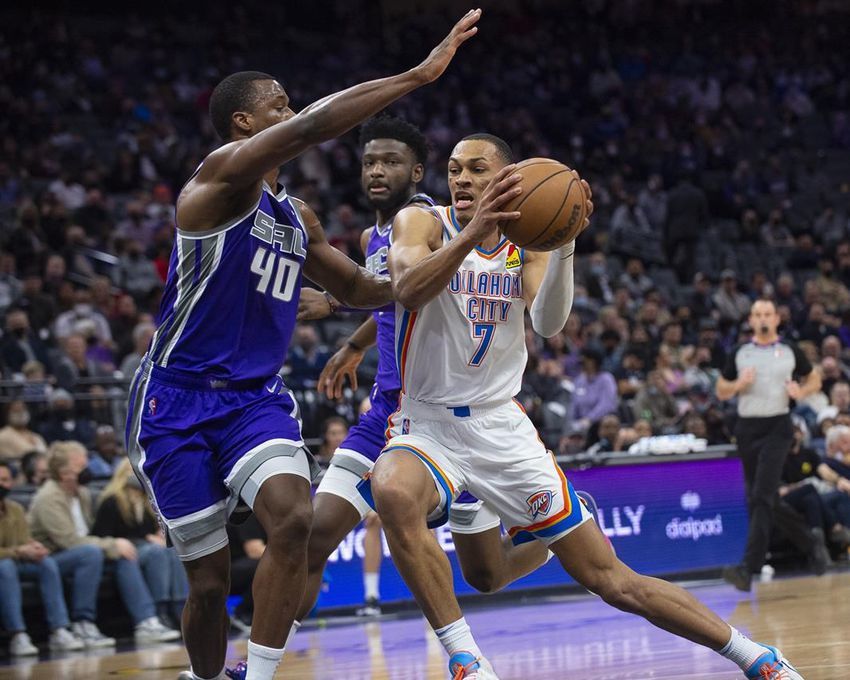 The NBA Playoffs are staring at us and this is a time when the intensity level of various teams pick up due to a variety of reasons. Some teams look for the last few wide-open spots that can get the ticket to the postseason and the Play-in tournament has added flavor to the current scenario. Sure, if you even nab the tenth position in a Conference, there is a chance to sneak into the Playoffs but this can be harsh for a seventh-ranked team at times. Anyway, the Western Conference has the last few spots up for grabs and as the Sacramento Kings visit the Oklahoma City Thunder, they need a boost.

The Thunder has lodged 19 wins and 41 losses, and have eked out a couple of Overtime victories recently, but yes, in the overall complexion, they have struggled to get going, especially on the offensive end. The Thunder is a young and inexperienced team so the current returns are not that surprising. On the other hand, the Kings have won 22 games and have lost 40 games, currently on a four-game losing streak. Despite getting Domantas Sabonis, the curse of losing streaks seem to not leave this Kings team and surely, they are in need of a winning streak to make sure they grab at least one among the last few spots for the Play-in tournament. Can they snap their losing streak against a team with an inferior record to them? To know my game total and result prediction, glide to “Expert Betting Tips”. For my player-based prediction, go to “Player Performance Prediction”.

Oklahoma City Thunder comes up with a surprise win every now and then, which is a testament to their defensive discipline. Shai Gilgeous-Alexander has been the undisputed scoring leader of the team but unlike teams like Rockets and Pacers, the Thunder has done well as a defensive unit. They do a great job of stemming the flow of fastbreak points but the next step to become an elite defense will be grabbing rebounds at a higher clip and becoming a better halfcourt defensive team, something that can be instilled in young players such as Josh Giddey. Darius Bazley has been a great presence as the big Forward but the team is short-handed with the absence of Dort, Giddey, Jerome, Williams, and Muscala. Thus, the upcoming window can be highly problematic for the peppy squad.

Are Kings a cursed Franchise?

The Kings have married themselves to blowout losses since the end of Chris Webber era. They were struggling before the midseason, blew up the core, trading Tyrese Haliburton, Buddy Hield, and Marvin Bagley III, bringing in star-level big Forward Domantas Sabonis, Justin Holiday, and Donte DiVincenzo. But guess what, nothing has changed about this team, they keep on going on those big losing streaks and despite nabbing Sabonis from the Pacers, things have looked grim for most parts. The team has a lot of talent and if somehow they can propel something special. I’d say a main five of Mitchell-Fox-Holiday-Barnes-Sabonis can be used as it addresses both offense and defensive needs, whereas the two wings balance may bring a more uptempo style of basketball?

Points: On average, the Kings have produced more points than the Thunder but they have been susceptible to cold shooting stretches too. Defensively, the Thunder has been way better than the Kings but with Dort out, there are holes to be exploited at the wing position and someone like Harrison Barnes can take the Thunder defenders to the task. If the Kings put clamps on Shai, they can stifle the Kings’ charge but overall, the Kings' defense is vulnerable mostly because the current core is yet to build chemistry. Even then, I believe they will hold Thunder below 110 while going past 115 here. I believe the total points range here is 220-230.

Prediction: Domantas Sabonis provides a significant advantage to the Kings in the middle and the Thunder lacks the tools in the Center position to outmatch the Kings. The guard battle between Shai and Fox can be decisive and I think that Fox will do his part here. I also believe Barnes will eke out a significant advantage at the wing position while the bench of the Kings will pull through. I see the Kings winning here 116:107.