Content
To top
1.
What they have accomplished, what is to come ahead
2.
Player Props Prediction
3.
Expert Betting Tips
4.
Betting Odds
Users' Choice
12 200 USD 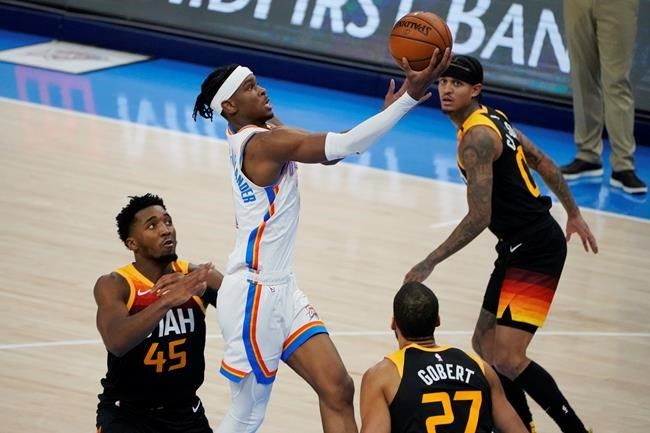 The NBA is an up-and-down league and the multitude of teams(30) mean we have a variety of systems both offensively and defensively. In the NBA, coaching plays a huge role because you have to deal with injuries, trades, and various other dynamics, therefore, a lot goes into crafting a team. In the Western Conference, the race to the top-six has been intense and various teams have picked up their game since the beginning of the year whilst others have recovered the tone that they set earlier. Talking about the West, in this game, the Oklahoma City Thunder and the Utah Jazz.

The Thunder has lost 43 and has won 20 games, and they have been struggling throughout the season. The team has been playing without their two-way wing Dort and their all-around rookie guard Josh Giddey but courtesy of Shai Gilgeous-Alexander, the squad has notched three wins in seven games. Jazz has won nine of their last eleven games and they have won 39 games and 23 losses in total. The Jazz lost to Pelicans by 30 points in a shock defeat but they sit in the top-four. The Western Conference has been competitive throughout the season and the Jazz is in a tight race with the Mavericks and Nuggets as of now. As the Playoffs will come near, the value of winning streaks will only increase. Can the Jazz nab one against a highly vulnerable Thunder squad? To know my game total and result prediction, go to “Expert Betting Tips’. For my player-based predictions, go to “Player Props Prediction”.

What they have accomplished, what is to come ahead

Jazz’s journey and the thorny West

The Jazz began the season in a riveting fashion and the team had computed 28 wins and 10 losses, but then the team lost the way when the squad’s leading scorer Donovan Mitchell and leading defender Rudy Gobert went missing. There was a period where the team lost around 80% of the games but when Mitchell returned, he did a great job as an all-around guard. This is when the team recovered their way and when Gobert returned, the team had a more balanced lineup. The Jazz has an easier schedule in the coming window where the squad will face below 50% win teams in four of the last five games. However, most of the squads are desperate with the Play-in tournament closing in and we can see the schedule become tougher than before.

The Thunder has been unable to notch many wins and they have gone on big losing streaks throughout the season. Oklahoma City has lost five or more in a row during four instances, and this spells a difficult season for the Shai-led squad. Still, this was to be expected from the rebuilding squad, and the team has a promising core with high-scoring Shai, all-around guard Josh Giddey, two-way wing Dort, a highly promising Forward in Jeremiah Robinson-Earl, and two strong Forwards in Isiah Roby and Darius Bazley. Tre Mann has also been impressive and it means that the rebuild is in the right direction. Their defense has been highly effective compared to other rebuilding teams especially when Dort and Giddey have been present.

Assuming these players are available, these are my player-based statistics prediction:

Points Range: The Jazz has been a better offensive team than the Thunder on a regular basis. With Mitchell raining 30 or so points on a regular basis, they are in play for going around 120 points or so. On the other hand, the Thunder has been struggling to produce offense at times, especially with their thin offensive lineup. The Jazz’s defense has been terrific these days and with the lack of shot creators, the Thunder can be shut down. Will the absence of Conley weaken the defense of the Jazz? I believe the Thunder will be held below 108 here on their home floor while the Jazz will go past 120 or so. I see the total points range as 220-230.

Prediction: The Thunder lacks someone who can match up to Rudy Gobert and the Center match-up certainly belongs to the Jazz. Meanwhile, Shai and Donovan can exchange buckets while Tre and Jordan can also even out the guard matchup. Isaiah Roby has been doing a great job alongside Bazley but Bojan Bogdanovic helps stretch the floor and the shooting of Jazz looks better than the Thunder. I believe the Jazz will win this game 122:106.