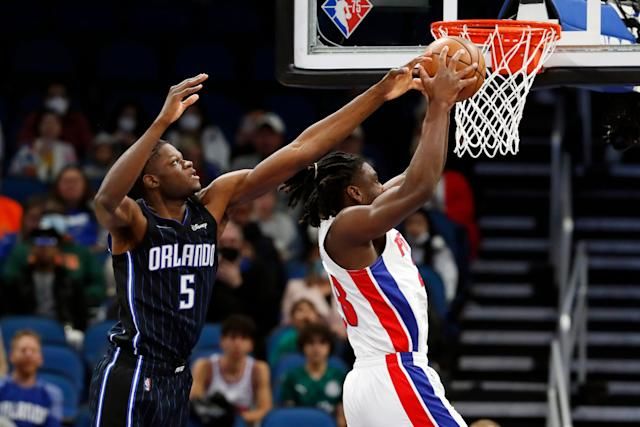 The NBA betting scenario is highly complex and don’t be surprised if you win or lose a bet by a single point. And as we push towards the Playoffs, there is the likelihood of various upsets and with the way the league has gone on, some of the squads in the East that were in mid-tier till January have risen for some big-time performances. And as we are just less than a month away from now on, this window is crucial for teams that seek to rack up some big gains. However, the two squads that will clash here in Orlando Magic and Detroit Pistons are not going to make the Playoffs and their journey will be halted soon.

Before we jump into the tussle, let us first establish who will be playing, which players are absent, and the list of players whose status is unclear:

Players whose status is QUESTIONABLE:

Players who are OUT:

Available Key Players for Magic (In the order of average minutes):

Available Key Players for Pistons (In the order of average minutes):

Similarities between the two teams

Both teams have a guard rotation that has been rather inefficient, however, Pistons’ Cade Cunningham has done a great job recently of accumulating points at a high clip, going past 20 or so while dishing a bunch of assists, and clamping a bunch of rebounds. On the other hand, Magic’s Cole Anthony has shot below 40% for the season but he has a potential to become a high-yielding scorer and playmaker, same is the case for Jalen Suggs who has shot even worse from the field but hey, he is a rookie who can also act as a playmaker. Killian Hayes as the back-up PG has been struggling too with his shooting but has done a great job as the playmaker.

In terms of frontline, both teams have a lot of promise. While the Magic has Franz Wagner as the wing, Wendell Carter Jr. as the Power Forward, and a Center in Mo Bamba. On the other hand, the Pistons have fielded two wings in Jerami Grant and Saddiq Bey and a Center combination upfront with Isaiah Stewart in the middle. For the Magic, the most effective defender, rebounder, scorer, and playmaker has been Wendell Carter Jr, while Franz Wagner has the potential to become an all-around wing. Jerami has been a great two-way presence while Saddiq Bey despite his erratic shooting has made gains in other areas such as playmaking and rebounding.

Points Range: Both the teams have not been on the high-side of the offensive end considering how they both have weak three-point shooting. The efficiency comes from the fact that there is a lack of flood stretching and not only is there a lack of shotcreators but there is a lack of scoring from the Center position. Defensively, the Pistons have been doing a much better job than the Magic and they have been giving even elite offensive teams a lot of trouble. This is why these can be a grueling battle and the total points range seems to be 210-220.

Prediction: Isaiah Stewart and Mo Bamba both have not been high-yielding scoring options in the middle. However, both bring strong rebounding to the floor. Jerami Grant is out for the game while Cade Cunningham is questionable and if both of them are out, the Pistons’ chances can dwindle big-time. In terms of the bench, Moritz Wagner has been a huge factor in the middle with his high-impact in a few minutes while Marvin Bagley III can slate in as the big Forward at the starting position. I believe this will be a low-scoring battle with Magic winning this game 112:107.