Philadelphia 76ers vs Cleveland Cavaliers: the Sixers have some weaknesses 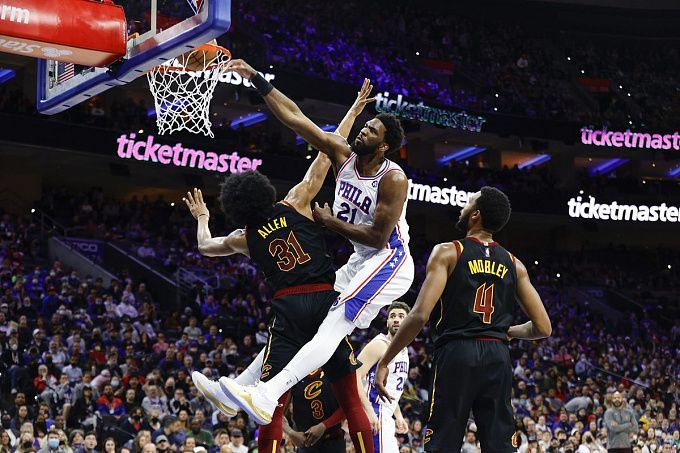 Philadelphia won four of their five home games against Cleveland. The Sixers are now in the optimal form — will they be able to extend their winning streak?

Philadelphia has won the last four regular-season games and is now in 2nd place in the Western Conference. The Sixers have a chance to contend for the league title: Joel Embiid is a contender for the league's most valuable player, James Harden is back and playing his best, and Tyrese Maxey doesn't plan to slow down after the addition of another superstar to the roster. The club is trying to find a backup center: the day before, Philadelphia signed Willie Cauley-Stein and DeAndre Jordan. It's possible that one of them could end up in the Sixers' rotation. The good news is that the sickbay is nearly empty: only Jordan's participation is questionable.

In their last two regular-season games, Doc Rivers' team defeated New York, 125-109 and 123-108. On offence Harden and Embiid were very effective in both games, and Tyreese Maxey was very stable. Tobias Harris shot well from beyond the arc, although he was generally secondary on offense.

The Cavaliers have suffered five losses in their last six games, and they are now just 6th in the East; the gap from the 7th position is slim. Darius Garland has been missing a lot lately due to injuries, and his recent return could very well help him catch up. Still, the role of the playmaker is critical in current Cleveland, and it's not for nothing that the club signed Rajon Rondo right away after Ricky Rubio's injury. Right now, though, Rondo is in the infirmary, and Caris LeVert won't play either.

Garland, however, didn't help Cleveland beat Charlotte in their last game, 98-119. Kevin Love and Markkanen had no successful three-pointers, Evan Mobley wasn't very noticeable, and it was Garland who had to save the game. The young point guard had 33 points and made four assists.

Philadelphia has beaten Cleveland 7 times in their last ten faceoffs. In the previous matchup, the Sixers were stronger at home, 93-103. Philly played without James Harden back then, while Cleveland had LeVert on the floor, but Markkanen was injured.

Due to the almost flawless play of Harden, the Sixers had a winning streak, but the star defender this season is not very stable; the decline may come at any time. Cleveland is good defensively, although it hasn't been very noticeable in the last two games. The visitors have good shooters, and a lot will depend on whether Love and Markkanen (or at least one of them) play well. In their last meeting with Philadelphia, Love did not succeed, and the Finnish forward did not come to the floor, so the Cavaliers have room to step up their game. I suggest betting on the following outcomes: