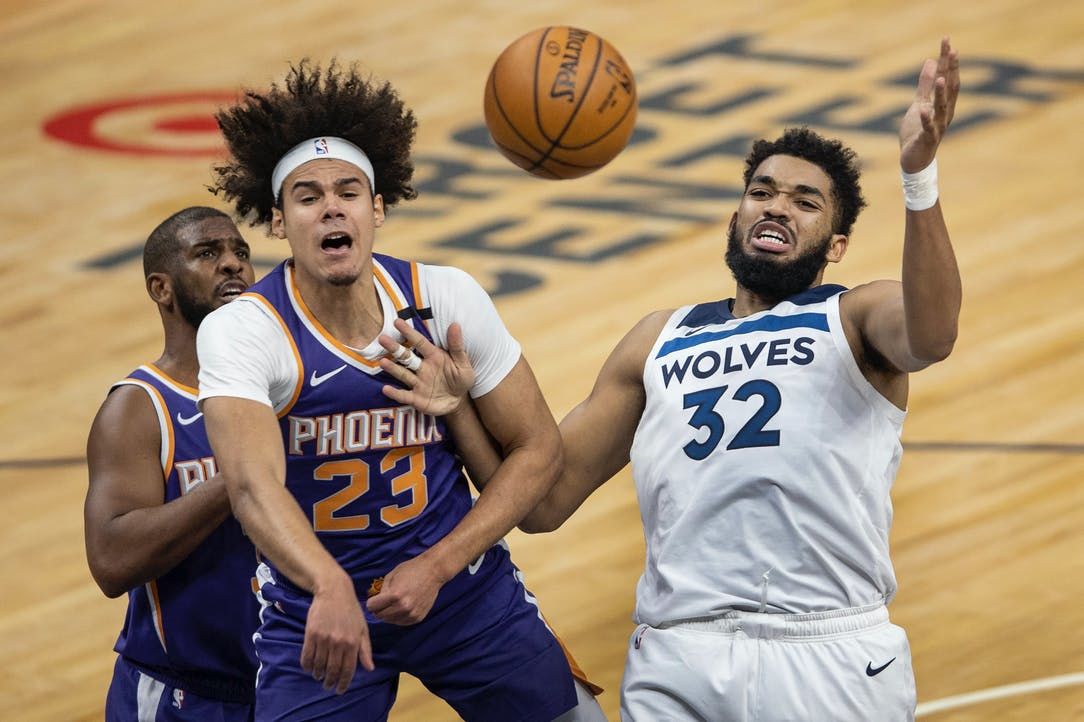 NBA betting has been a thrilling affair since the beginning of the season. And just like different teams, the bettors can also hit a cold and hot streak, as the season unfolds. Well, some teams have picked up the steam as the midseason has been in full flow while the others have struggled to stay put, losing their earlier rhythm. However, there are teams that establish such templates at the beginning of the season, that they keep on winning and don’t stray from their mantra. And one of those teams in Phoenix Suns will host the Minnesota Timberwolves in a Western Conference tussle.

The Suns have been playing at a high clip that no description can capture their superb season run. The team has won 38 games and has lost just nine games, being the only team not to have lost ten games this season. The team has won eight games in a row and for a team that has been on an eighteen-game winning streak, this is not a surprise. Meanwhile, the Minnesota Timberwolves haven’t been as consistent, in fact nowhere even close. The young Wolves team has compiled 24 wins and 24 losses, hovering around the 50% win mark throughout the season. Still, this is a huge improvement compared to last season and well, they do have a solid foundation considering all things. The Timberwolves will come into this game after suffering a 115:124 loss versus the Warriors. Can the Suns win ninth in a row against a team that will play the second game on the second night? Go to “Expert Betting Tips” for my game total and result prediction.

Suns have been crushing teams

Phoenix has been the best team in the league by far. What makes them special is that they keep on sustaining their run and have not hit a cold window except the first few games and they have done a great job of winning close games and they have also blown teams out of the building. When the Suns are engaged in close battles, their ability to close out games in the final period has also been a huge reason for their current record. And what does that mean? When the games become more intense during the Playoffs, the team will be ready to fend off oppositions as they have learned to survive various styles of game play, which is the whole point of the Regular Season!

This team has perhaps the best backcourt in the league, because of how well they complement each other. It was Chris Paul who made the difference last season as he took the ball-handling burden off Devin Booker and well, having the best passer of this generation certainly helps the cause, doesn’t it? Well, coming to Booker, he can heat up during most games and with him and Paul, the Suns have two players who can hit late-game shots. Even with four key rotation players in Ayton, McGee, Payne, and Crowder out, the team can employ two wings in Johnson and Bridges along with reserves Biyombo, Shamet, Smith, and Payton, the team may be stretched thin but they have such firepower that they can impose their will game in and game out.

The Timberwolves won less than 33% games last season with almost the same core as now but yes, the inclusion of Patrick Beverley and the rise of Jarred Vanderbilt has surely helped the cause. Minnesota has won 50% of their games so far and they have already won more games than they did in the 72-game 2020-21 season. This has implied that the young players of this team have developed at an impressive rate and the Timberwolves have shown that they have the potential to do much much more. Can Minnesota capture a 55% win record this season and make it through the Play-in Tournament or capture the sixth seed?

Well, let us see if they will rise further but yes, offensively, they have been in incredible form. Anthony Edwards has improved his shooting and is a consistent 20 points+ scorer, Towns can seal the middle and provide both high-quality points and rebounds. Meanwhile, D’Angelo Russell has had a superb season, being one other scorer who can get to 20 or more regularly. Vanderbilt provides hustle and rebounding with occasional inside scoring. McDaniels has done well in terms of scoring. Off the bench, Malik Beasley has struggled but has had his impact too while Jaylen Nowell has showcased huge improvements this month and his off-the-bench scoring is much needed. Anyway, the team needs a lot of work to do on defense, can they figure out that end with the young legs?

Points Range: Suns have been in the different scoring columns and they are comfortable with both high-scorers and low-scorer. But yes, against struggling defensive teams, they have gone past 110 or so on a regular basis. On the other hand, for Timberwolves scoring around 110 or more has been a routine especially since December. In terms of offense, both teams have been doing pretty much the same but it is the other end, where these squads are way different. The Suns have been not allowed teams to score 110 during most of the games, limiting them to the 101-107 range during most games. On the other hand, the Timberwolves allow 110+ during most games, and their defense is not at the Suns’ level by any stretch of the imagination. I think the total points range here is 220-230.

Prediction: The Timberwolves played the Warriors last night and well, they were dominated by them for most of the game. Playing their second game on the second straight night against the team with the best record, their chances look slim. Considering Devin Booker’s recent offensive surge, the Timberwolves defense can be overrun by the Suns early into the game and well, they are amazing at taking advantage of teams that play the second game in the second night. I think the Suns will take this 119:106 in a game where Paul will also score more than his average.