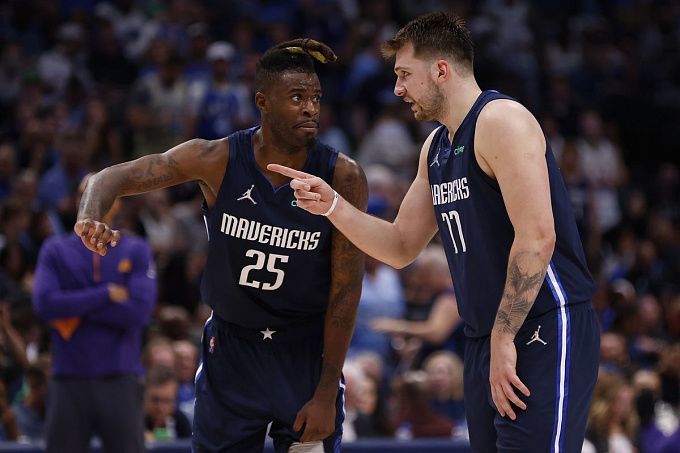 Luca Doncic will play in Game 7 of the playoffs for the 3rd time in his career. So far he hasn't brought Dallas to victory in the deciding game. This time, the Mavericks are facing the Western Conference winner, Phoenix. Can the Slovenian superstar crack such a tough nut?

The Suns made the first round of the playoffs even despite Devin Booker's injury. The start of the series was good, but then in the last 4 games the team suffered 3 losses. Chris Paul, who is completing offensive snaps less and less frequently, has given up a lot. One of Phoenix's leaders might play injuried. The Suns have down to 5-6 players capable of posting playoff-level playmaking ability: Landry Shamet is hitting just 37.2% of his field shots while Cameron Payne is not even close to 30%. Cameron Johnson and Jae Crowder's three-point percentage has dropped off significantly, so the Suns have many problems. DeAndre Ayton and Devin Booker have been very effective, averaging 19.0 and 24.7 points in the playoffs. The good news is that only Dario Saric absent.

Last game, Monty Williams's squad suffered an unusually high rate of turnovers losing contributed with 27-point deficit. In addition, Phoenix shot just 18 three-pointers, making only 6, with Chris Paul being the team's leading shooter. DeAndre Ayton was the Suns' most efficient player offensively with 21 points on 10-of-16. Booker scored on only 6 of his 17 attempts, while committing 8 turnovers.

The Mavericks lead all playoff teams in three-point attempts by a wide margin. The team continues to struggle largely due to their high 37.7% realization. Luca Doncic, meanwhile, is hitting just 32.1% of his three-pointers, with Davis Bertans, Reggie Bullock, Maxi Kleber and Dorian Finney-Smith making huge shooting percentages. Six Dallas basketball players at once are averaging 10+ points in the playoffs: Doncic, Brunson, Dinwiddie, Finney-Smith, Kleber and Bullock. Defense under the basket is one of the Mavs' weaknesses: they are the worst in the postseason at blocking. As for the roster, only Tim Hardaway, Jr. is injured. What is interesting is that with three players capable of playing point guard, Frank Ntilikina gets quite a lot of minutes on the floor.

One of the strengths of Dallas is their low turnover percentage. Not for nothing did the head coach constantly tell his players to keep the ball. As a result Jason Kidd's team made only 6 turnovers and claimed a huge 113-87 win. The Mavericks shot 41% of their three-pointers and Bullock and Dinwiddie were the team's top scorers with 5 points each. Doncic was the highest scorer for Dallas with 33 points.

Last home game, Phoenix shut down the Dallas role players first, not allowing them to turn around at the arc. That tactic paid off. Doncic should take even more shots in this scenario, although he finished off many of the offensive rebounds the day before. The Slovenian can improve his shot percentage from beyond the arc. Also, he missed several shots that would have gone in the paint on a better day.