Phoenix vs Milwaukee: an even game 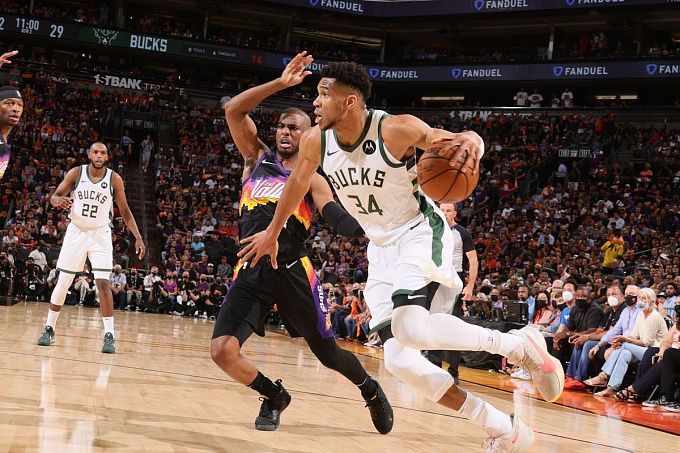 Between these two teams, Phoenix is the favorite to win the series. If they win Game 2 of the Finals, the Suns will take a huge step towards the title. The Bucks haven't been able to defeat The Suns since 2017 - can they break the losing streak?

The Suns had a tough road to the NBA Finals as Chris Paul suffered a shoulder injury during the postseason and missed two games against the Clippers because of getting the coronavirus. The veteran star's role for the team cannot be overstated: Paul is averaging 19 points and 8.7 assists in the playoffs. Devin Booker is also very good, although he's slightly less efficient than he was in the regular season. Deandre Ayton has improved on both ends of the floor, but there is a problem with the backup center. Dario Saric is out for the rest of the playoffs due to an injury, while Frank Kaminsky is not a viable replacement for the Croatian. The good news is that the club has a rotation of 8-9 guards and that Torrey Craig has fit in well with Phoenix's defensive scheme.

In the first game of the series, Monty Williams's team came out on top with a 118-105 score. It was an intense battle in the first half, but by the end of the third quarter, Phoenix led by as many as 19 points. Chris Paul was unstoppable on the night, hitting a lot from mid-range and also made 4 3-pointers. Devin Booker had 27 points on 8 of 21 from the field, but Eaton was very effective: 22 points, 19 rebounds, and 80 percent shooting.

The Bucks have had even more adventures reaching the finals, and it remains to be seen if they will be able to perform at their best. Donte DiVincenzo left due to an injury after Round 1, noticeably reducing the rotation capabilities, but the team was able to go on. Giannis Antetokounmpo suffered a serious injury in the East finals, and he's recovery right now. Even with Giannis' injury, Milwaukee pulled through, and Chris Middleton, who averaged 23.7 points against Atlanta, played a key role in their success. Bobby Portis and Brook Lopez played well on separate occasions and Jrue Holiday performed nicely on the offense, although he lacked consistency.

Mike Budenholzer's team has not had a high percentage of shots from beyond the 3-pointer zone this playoff. In the recent game against Phoenix, Milwaukee hit 16 of 36 three-pointers (44.4%), but it didn't help. Giannis Antetokounmpo was not as prominent and made only 11 shots from the game, scoring 20 points. Lopez and Middleton were the Bucks' leading scorers, and Connaughton and Forbes had some nice shots. Middleton ended up being the highest scorer on the team with 29 points.

Milwaukee has been able to rebuild their game many times in the current playoffs, and now they still have a reserve to step it up. Middleton and Holiday can be more effective on offense compared to the last game against Phoenix, and Giannis is capable of taking more shots from the field. The Suns had trouble defensively against Antetokounmpo during the regular season, and their head-to-head encounters have been tight as a whole. Saric's injury will still affect the home team's rotation, and Frank Kaminsky and Jalen Smith will not be able to replace the Croatian on an adequate level. I suggest betting on the following outcomes: