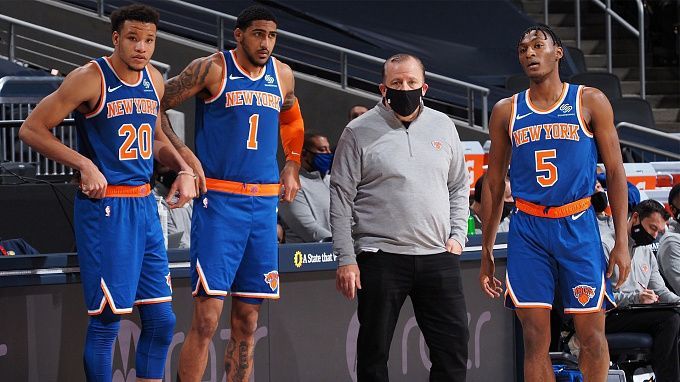 Portland was one of the top sellers at the NBA deadline. The Oregon club accepted the fact of a disappointing season and worked with an eye toward the future. At the Knicks, the story is different – the organization is said to be riven with controversy. Who will win in a matchup of such troubled teams? Let's pick a few betting options at once.

Portland lost nearly all of the key players

CJ McCollum has become a major contributor to the Trail Blazers' trade campaign. One of the team's longtime key players, Damian Lillard's right-hand man and the 2019 Western Conference finalist will continue his career in New Orleans. Norman Powell and Robert Covington also left Portland for the Los Angeles Clippers. Lillard himself stayed, and that, despite the departure of almost the entire starting five from the team, is big news for the Trail Blazers. Lillard essentially moves into the role of Chris Paul at Phoenix, that is, playing assistant to a young head coach, in Portland's case, Chauncey Billups.

The Trail Blazers have worked themselves into a deadline for the future, meaning the team's claim to any accomplishments this season can be forgotten. Well, in the last game the truncated rotation and denial of any immediate prospects did not prevent Chauncey Billups' team from beating the Los Angeles Lakers at home. 107-105 - there's hardly a word here about Portland and not the Lakers' current struggles. Except that the Trail Blazers broke their six-match losing streak.

Will New York get closer now?

Like the Trail Blazers, the Knicks were also planning a big trade in the deadline. They made almost every major player available for trades in the franchise. But in the end, fans of the legendary team never heard any news before the trade market closed. What's next. The Knicks are only 12th in the East, but apparently they'll have to fight for higher ground or the season will simply go to waste. Rumor has it there's a serious disagreement between the front office and coach Tom Thibodeau. The coach was against both inviting Kemba Walker and the departure of Cam Reddish, but he was not listened to. Well, management decided they understood better what the team needed than the coach who led the Knicks to the playoffs last season, making it the team with the league's best defense.

The players just have to rally around the head coach now. As the first game after deadline showed, some kind of emotional breakdown at the finish of the championship is quite possible. The Knicks defeated the Golden State Warriors 116-111 on the road and showed the will to win. Tom Thibodeau's team is only 1 win away from the playoff spot. So the Knickerbockers still have plenty of chances to make the playoffs.

The teams have exchanged home wins for two seasons in a row.

Portland went into a rebuild at the end of the regular season and is unlikely to be able to get a second win in a row over a motivated opponent. The Knicks, having failed to pull off deadline deals, are forced to work for results here and now, in the closing stretch of the championship. Motivation will play a key role in the upcoming game.