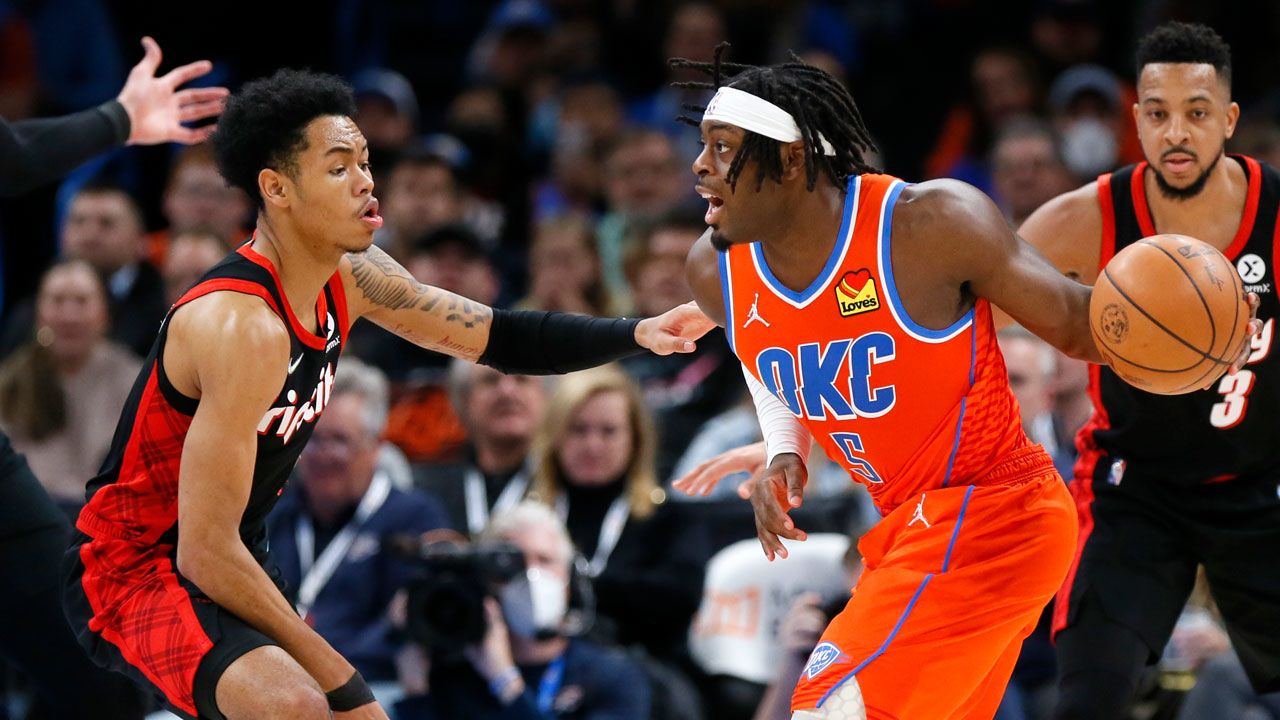 NBA is now heading towards the All-Star Break but before that, the trade deadline is hovering and well, don’t be surprised if you see some big-time moves by different teams. The Trade deadline means different things for different teams and for players too. Some players seek a change of scenery, some teams aspire to improve their roster balance, others claim some draft picks. However, since NBA is a business, many moves are made to unload hefty contracts and well, there are various reasons for teams making changes. Will the two teams meet here in Portland Trail Blazers and Oklahoma City Thunder make some moves?

The Trail Blazers have lodged 21 wins and 31 losses, and despite the abysmal record, they remain in the Play-in contention. However, it isn’t like that the Portland squad has built a safe distance from teams such as the Pelicans, Kings, and Spurs, who are just a couple of wins behind. The Trail Blazers, however, is not looking like a Playoffs team as of now and I doubt they can be an enforcer once the Play-in tournament arrives. As of now, they need to take care of business after losing three in a row.

On the other hand, the Oklahoma City Thunder are having a tough season with just 16 wins and 34 losses, and well, this was to be expected from the young team that lacks a substantial frontline depth. Now, with Shai Gilgeous-Alexander, the leading scorer out, and with rookie Jeremiah Robinson-Earl absent as well, the team is surely running thin. Despite all of that, the team is on a two-game winning streak before Luguentz Dort’s hot shooting. Can they sustain that momentum? To know my game total and result prediction, go to “Expert Betting Tips”.

For Portland Trail Blazers to solidify their chances of advancing to the Play-in tournament, I think they will need to win at least 50% of their games. First, they need to snap their current losing streak against a vulnerable squad. McCollum has shot well recently, while Nurkic, Powell, and Simons are more than dependable offensive options. This team has a lot of firepower even with Lillard out and for me, it is a surprise that they suffer offensively at times. I think if there are a few adjustments then they can surely go on a winning run from here on. Surely, the bench has been a weakness but yes, with Powell at wing, Simons and CJ McCollum at guard positions, and Nurkic in the middle, they can field a substantial attack. Can someone make an impact off the bench?

Even if Oklahoma City Thunder has lost quite a bit this season, the coaching staff must be pleased with the regular defensive discipline of this squad. They have some recurring issues on the offensive end but the young bucks of Thunder have done well at the defensive end. Dort has raised his offense with Gilgeous-Alexander out and this is a phase where Giddey can find the ball in his hands more often, which can enable his growth. Tre Mann had the game of his life versus the Mavericks with 29 points and if he sustains it, who knows if Thunder gets on a run. Will Josh Giddey also raise his scoring level with Gilgeous-Alexander out? I think overall as a rebuilding unit, Thunder have had some promising results.

Points Range: The Trail Blazers have had a couple of tough games on the offensive end, scoring below 100 and figuring in the early 90s and early 80s during those outings. However, do remember that those two games came at the end of a road trip and this time around, the team will be playing at home. On the other hand, the Thunder have scored 110 or more in three of the last four games, playing well on the offensive end without Shai which makes this impressive.

In the last meeting, the two teams fetched only 179 points which is really a low-scoring return. However, I don’t think this game will be that low-scoring. Defensively, the Thunder has been better than Trail Blazers on average whereas Trail Blazers can give up many points. However, I see the Trail Blazers put on a great effort on both ends of the floor. I see Portland going past 105 here while Thunder hovering around 100. I think the total Points Range here is 200-210.

Prediction: I see the Trail Blazers have a strong offensive game here and I feel Powell, Nurkic, Simons, and McCollum will have efficient outings. On the other hand, I see Trail Blazers restricting Dort under 20 or so. I feel that this is a game where the Thunder will struggle to score and give away a big lead by the end of the second quarter. I think the Trail Blazers will win here 108:100.