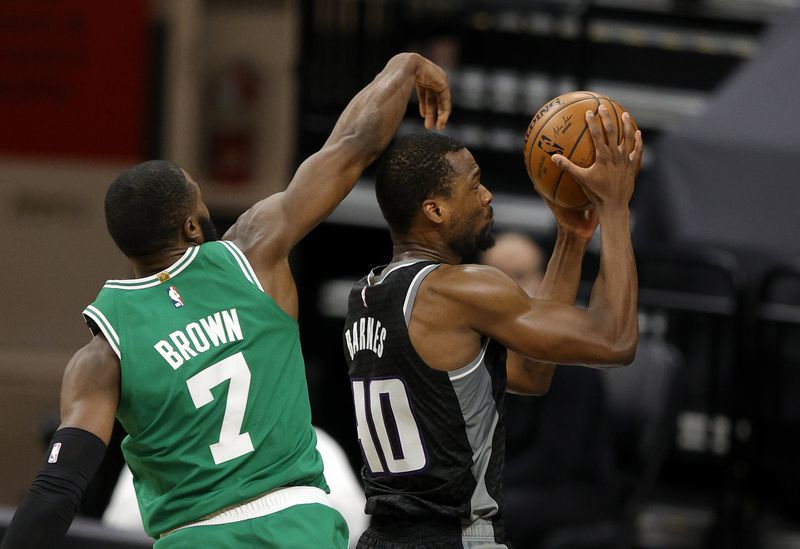 Before we dive into this particular battle, I wonder how the NBA betting scenario has been for the readers? How are your predictions going on amidst the chaotic scene of the NBA? There is a lot to bet on, whether it is the outright winner, the total number of points, the point differential between either team, players-stats prediction, and much more. As the season keeps on heading towards the Playoffs, there is bound to be a desperate push from the team that is looking to solidify their positionings or are either at the periphery of the Play-in tournament. And one of the teams at the periphery is the Sacramento Kings that will take on Boston Celtics.

Fall and fall of the Kings

The Sacramento Kings are having a difficult season and well, who is surprised by that! The team has been in dire straits for many seasons now and even after acquiring Domantas Sabonis, things have been grim for the Alvin Gentry coached squad. There is still a lack of cohesion on the defensive end and at this point, I find it surprising that fresh combinations in the main five-unit have not been tried. The Kings have been unable to avoid blowouts and the fanbase at this point doesn’t expect much.

So, for a team like Kings, expecting to win against a team like the Celtics is a big ask at this point. While the team has seen all-around productions from Fox and Sabonis, Barnes has been rather inconsistent this season while Lyles has been decent at boards, his scoring isn’t that much and for a team that gives away a ton of points, a lot of points are needed from every position. Bench players DiVincenzo and Davion Mitchell have shown promising signs recently, but the team needs a major run from here or they can kiss the chances of making the Play-in tournament goodbye.

The Celtics beat the Warriors by 22 points in the last game and held them to a mere 88 points. This is not surprising considering there has been no team since February that has held oppositions to low totals than the Celtics. This increase in winning output has enabled the Celtics to shoot up in the rankings. They have won more than 80% of their games since February and this has meant that the squad is in a decent distance from the top-ranked Heat and if anything, they remain in firm play to seize the top-two or three rankings. They will play seven out of the next 12 games away from home but they have been stacking up wins on the road these days.

The defense is both strong outside and inside. All the key rotation players in Smart, Tatum, Brown, Horford, Williams III, White, and Williams have both the size and athleticism to switch during multiple instances and the team can keep the defensive ante up throughout the season. While the offense is highly reliant upon Tatum, Smart and Brown make up for a strong offensive backcourt duo while Williams and Horford set tough screens with Williams making up for tough inside finishes and second-chance points. Derrick White has struggled a bit offensively but brings strong defense off the bench while Pritchard and Williams have gotten it done in limited minutes.

If these players are available, below are my player-based predictions:

Points Range: The Celtics can shut the shop against even elite offensive teams so the Kings that are highly inconsistent can especially struggle against them. De’Aaron Fox is questionable for the game, which will make matters even trickier for the Kings. On the other hand, even if the Celtics are not among the elite offensive teams, they have improved considerably and have gone past 114 or more consistently and the Kings are allowing these many points on a consistent. The Kings can have trouble even getting close to 100 against the Celtics, but I believe they will at least hit the 101 points mark here. I believe the total points range here is 220-230.

Prediction: The Kings have been having troubles against elite Celtics and although they did win against the Bulls recently, this has not been a case consistently. The Celtics have been in their prime recently and if Fox ends up missing the game, the going for the Kings will only become trickier. I see Brown and Tatum putting up a scoring galore here while Derrick White also rediscovering his touch. I predict a 122:104 Boston win here.