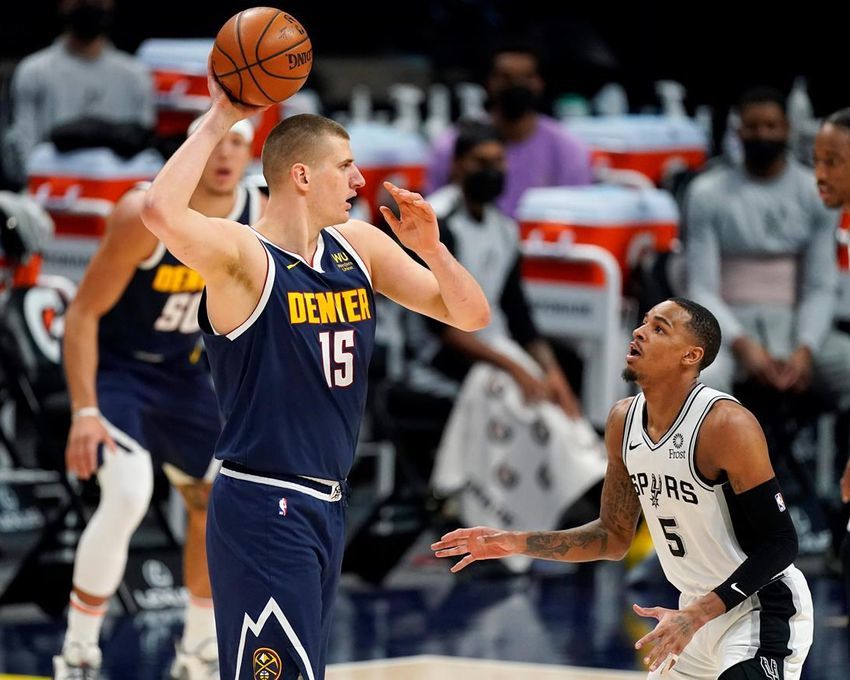 Let me ask you, what is your betting style? Is it gut, is it analysis, is it about odds or is it a mixture of all? Why are you reading this tip? The NBA is not as predictable as the odds may suggest and we can see varying results since each of the 30 teams play a 82-game long season. To add to the long list of the NBA matches, here, the San Antonio Spurs welcome the Denver Nuggets for an inter-conference classic Western Conference tussle. The Nuggets have a better record but the Spurs have given a tough time to teams like Suns and Warriors recently. For a quick look, simply head over to “Notes”. For the discussion on “Total” and “Prediction”, go to the “Expert Betting Tips”.

The playing styles of these teams are contrasting. While Nuggets rank fifth-slowest with a pace of 97.7, the Spurs are a bit ahead with 100. This difference in pace means that on average Nuggets have attempted around 86 shots while the Spurs have lodged 92 attempts from the field but yes, the Nuggets have also attempted six more threes than Spurs on average. Actually, Spurs are dead last in attempted threes with 29 a game and that is the least number of attempts by a significant distance from other squads.

The Nuggets set it up in the post with Nurkic being the central part of the offense, who can both score and hand over assists even against pressure defense. Meanwhile, Spurs work it around the perimeter and look for open players and with two stellar playmakers in Derrick White and DeJounte Murray, Spurs rank second in assists per game with 27.7 and surely historically, coach Greg Popovich has placed emphasis on sharing the ball.

The Nuggets have been a better defensive team than the Spurs even without their dynamic defender Michael Porter Jr. Yes, the defense is not effective as early in the season but the Nuggets are not allowing teams to score 120 points like the Spurs on a regular basis. The slow-paced style of offense can help in the defensive schemes but the Spurs have also been doing a decent job recently, case in point? They held the Warriors and Suns to 108 and 107, which was below the scoring average of both teams. However, with Keldon Johnson, can that scheme be affected for San Antonio?

Let me shed some light on the match-ups here. The biggest headache for the Spurs can be Nikola Jokic and Jakob Poeltl will have his hands full against the extremely gifted post-scorer. Nikola is physical and his ability to pass the ball will keep all of the defense fixated upon him. At the PG and SG positions, Murray and White can outmatch Morris and Barton while at Forward positions, with Keldon Johnson out for Spurs, the two teams are evenly matched-up. In terms of the bench, no team can claim an overwhelming advantage unless Lonnie Walker IV can dig up some big-time scoring night. I think if Spurs can hold out Jokic to 20-25 points, they will have a great chance of nabbing a win here. However, if Nikola Jokic is in the mood for a big night, the Spurs’ chances are going to take a severe hit.

Points Range: Of course, the good old “Total” discussion is here. I think with Keldon Johnson out, the Spurs offense can take a hit but I believe Lonnie Walker IV is up for a big game here. I think White, Murray, and McDermott will pick up the scoring while Poeltl will also chip in with decent contributions. On the other hand, I think that the Nuggets may struggle to score after an Overtime game just last night but with Jokic in the mix, those thoughts can become broken glass. Still, I think the Nuggets will score between 100-107 here while the Spurs will pile up around 108-116 points.

Prediction: The Points Range here clearly indicates who I am picking up as the winner. I think the Spurs will bag this one. Why do I feel this way? I think this team can put the Nuggets in jeopardy with its passing and unsettle the defense through relentless scoring. I take the scoring line of 114:104 in favour of the Spurs. Let us see!