San Antonio Spurs vs Golden State Warriors: the Spurs have too many losses 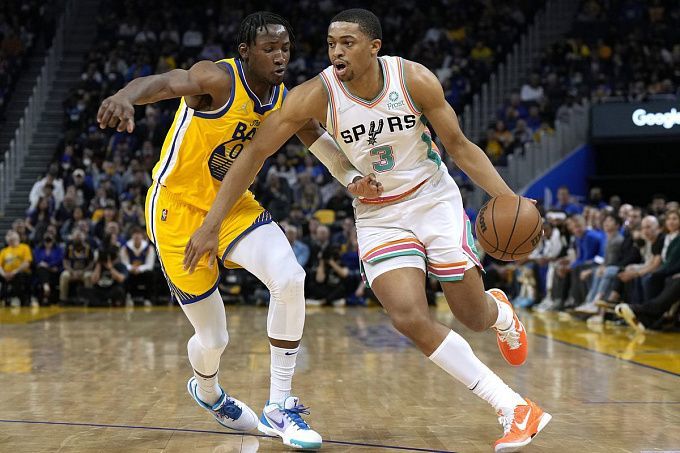 The Spurs have beaten Golden State twice this season, but a win in the upcoming game would not change the Texans' standings. Even at home, San Antonio is the underdog — can they make a sensation?

The Spurs have won 3 of their last 4 regular-season games and have secured a play-in. However, the club's leader, Dejounte Murray, missed 3 games due to illness, and he won't play against the Warriors either. Murray's replacement is Tre Jones who is good on defense and has 34 assists for 2 losses in 4 games. San Antonio was fortunate to have a somewhat manageable schedule. For example, the Spurs beat Portland twice before, which is clearly one of the weaker clubs in the league right now. The three-match winning streak was interrupted in the game with Minnesota, 121-127. Eight Spurs players scored more than 10 points, but the poor defense negated all the efforts. In comparison with the game against the Timberwolves, the team will have a lot of losses: In addition to Dejounte Murray, Jakob Poeltl, Devin Vassell and Keldon Johnson are out. Doug McDermott is out for the rest of the season and Romeo Langford is questionable.

The Warriors lost 6 of the last 10 matches in the regular season, but the club approaches the matchup with San Antonio on a three-match winning streak. Golden State defeated Sacramento, Utah, and the Lakers in turn, but has not yet secured third place in the Western Conference. Klay Thompson is pleasingly on the rise, having scored more than 30 points in 3 of his 5 games with the team. Jordan Poole, in the absence of Steph Curry, has become almost the leader of the Warriors' offense and his stats in the last month are impressive: 26.4 points and 5.5 assists. Curry will not play against San Antonio either, nor will Thompson or Wiseman be on the floor.

San Antonio has defeated Golden State six times in their last 10 faceoffs. In their last face-off, the Spurs were stronger on the road, 110-108. The Spurs had to do without Keita Bates-Diop, Doug McDermott, Romeo Langford and Lonnie Walker while the Warriors were without Gary Payton, Steph Curry, Moses Moody, Andre Iguodala and James Wiseman.

The Spurs remain competitive with any lineup thanks to the fine-tuned system of the game, but it is tough to expect to win. The Spurs are short on snipers and will be sorely lacking Murray, Wassell and Johnson in finishing offenses. The Warriors roster is also far from optimal, but with Poole, Wiggins and Green, the Warriors are clearly a stronger team. I suggest we bet on the following outcomes: