San Antonio Spurs vs LA Lakers Prediction: The Lakers have a golden chance to win 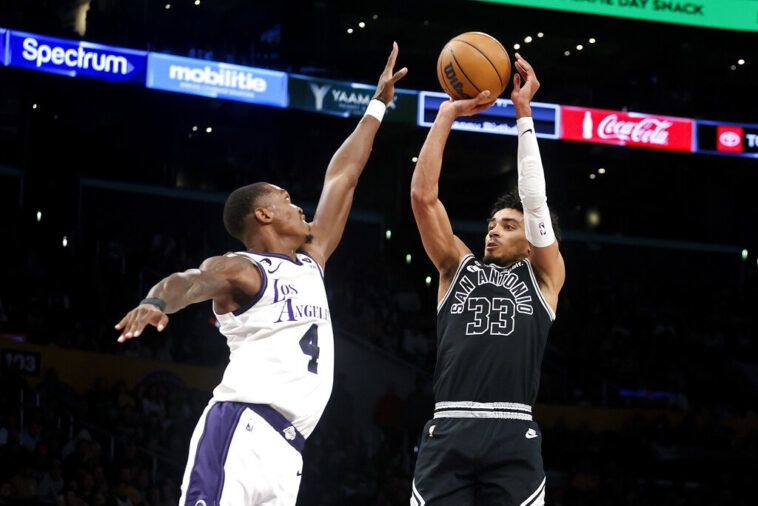 The NBA season is in full flow and this has been an intriguing start as many teams have hit ascendancy while some have fallen way too far. A lot of amazing battles are lined up and this can be a window where injuries and fatigue are going to line up as well. There is a long way to go so perhaps a lot of flip-flops are awaiting us. In this game, the San Antonio Spurs are going to take on the LA Lakers.

The Spurs come into this game after suffering a 110:129 loss against the Pelicans despite a 26 points outing by Devin Vassell. They have now lost 11 of their last 12 matches and have wasted away a five wins and two losses start. Their offense and defense both have been among the worst teams for multiple weeks now and most of their losses have been by 18+ Points too. This means that their season has derailed and as expected, they have showcased that they are a rebuilding team.

These results were going to come considering that the team shipped away their best player DeJounte Murray and thus, the burden fell upon inexperienced players. While Devin Vaseel and Keldon Johnson seem promising players, are they the answer for long-term success? Two-way Wing Jeremy Sochan has been an electric presence but he has ways to go. Jakob Poeltl is the type of player who can bring in a lot of value during the trade scenarios as there are teams that’d love to have a screen-setter, rebound-getter, and inside finisher like him.

The Lakers enter the game after losing 105:115 to the Suns despite a 37 points performance by Anthony Davis. They lost after a three-game winning streak and their overall tally of 11 losses and five wins looks below average. The last loss was typical of the team, cold shooting spells, terrible defense in parts, and a lineup that lacks depth. Due to this, even the three-game winning streak didn’t seem to have developed confidence and the team looks vulnerable, especially against strong teams.

The Lakers' setup is full of All-Star players but the lineup has been unable to get anything going for two straight seasons. Davis playing like an MVP on both ends but only he has been the shining light, perhaps apart from Lonnie Walker IV. Russell Westbrook is a mixed bag, he brings tremendous playmaking but can be out of control while running the ball and can also be lost on defense. The team awaits the return of LeBron but the question is how far can the management tolerate this unit messing it up repeatedly?