Content
To top
1.
San Antonio are back in top-10
2.
Memphis is one of the top contenders for the title?
3.
Injured reserve
4.
Head-to-head encounters
5.
Expert Betting Tips
Users' Choice
12 200 USD

San Antonio Spurs vs Memphis Grizzlies: the Grizzlies to prove one of the best teams in the league 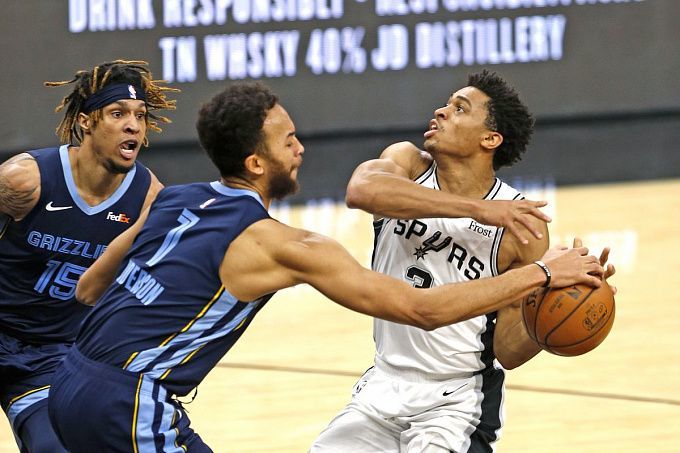 San Antonio won four straight matches, moving up to 10th place in the Western Conference standings. Will the Spurs be able to clinch a playoff spot by beating Memphis at home? Let's pick a few options to bet on at once.

San Antonio are back in top-10

Gregg Popovich's team overtook the Los Angeles Lakers with a winning streak and regained their position in the play-in zone. Will the Spurs continue their quest for a playoff spot this time, too?

As part of their good run, San Antonio defeated Golden State, Portland, New Orleans, and Houston. The Spurs played all of them on the road. The Spurs are now 31-44. They are 10th in the West. The Lakers, who are in 11th place, have the same balance. New Orleans is in ninth place with a one win handicap.

Memphis is one of the top contenders for the title?

The playoffs, of course, will be a very different game, and it's far from certain that Memphis will be able to go far in a four-win series. In the regular season, however, Taylor Jenkins's team had phenomenal success. With a 53-23 record, Memphis ranks second in the Western Conference and unlikely to relinquish that position to anyone else. The third team in the conference, Golden State Warriors, is five wins behind the Grizzlies.

It was Golden State that the Grizzlies defeated in the previous game. 123-95 – Memphis played at home and crushed the Warriors. It should be noted, though, that Golden State had to do without all of their leaders in that game.

The score in the season series is 3-0 in favor of Memphis.

San Antonio has gained momentum and it was no accident that they won 4 matches in a row. However, the Spurs are unlikely to be able to stop Memphis. The Grizzlies have found their effective style of play and not only are they stable over the course of the league, but right now they are probably the best team here. Regardless of their leaders being present or absent.

Prediction: a win for Memphis.