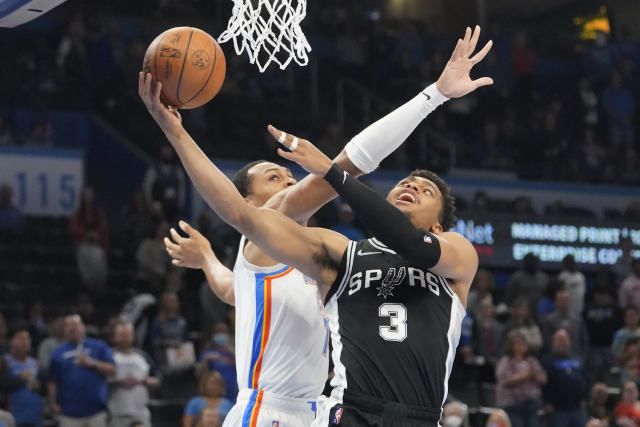 The Western Conference has been riveting all season long and we have seen the Phoenix Suns rise up from not only other teams in the Conference but from the whole team at this point. On the other hand, the Memphis Grizzlies and the Golden State Warriors have been parrying against each other for the second position. Mavericks, Jazz, and Nugget have been fighting vigorously for the fourth spot and the Timberwolves have been trailing them too. Then we have the Los Angeles Clippers, and below them are the Pelicans and the Lakers. And below them, we have the San Antonio Spurs, a squad that will take on a team that is even below them in Oklahoma City Thunder.

Spurs are struggling to get a winning run

One of the biggest weaknesses for the Spurs has been their inability to go on a winning streak, and the team has lost six out of their last eight games and even before that, the maximum they had was a two-game winning streak. The team last won three games in a row during the Christmas period, which signifies the widespread struggle of the team with each month. The team doesn’t have a tough schedule going ahead but the squad has to get it going if the Spurs are to make the Play-in tournament. They can still catch up to either the Lakers or the Pelicans but they’d need a four/five game-winning streak to solidify their chances.

One thing that coach Pop has reinforced throughout the season has been the ball-sharing principles and the Spurs have been number one in terms of an assist per game for a long time this season. However, since Derrick White has gone, the team depth has been hurt even if DeJounte Murray continues to raise hell against the opponents as a scorer, playmaker, rebounder, and perimeter defender. Keldon Johnson has raised his scoring, Jakob Poeltl is a rugged screen-setter, rebounder, help defender, and inside scorer. Doug McDermott’s absence will hurt the team balance in terms of shooting for sure so yes this is an area of concern. Devin Vassell and Lonnie Walker IV are going to define the Spurs' effort.

Oklahoma City Thunder has lost six games in a row and the team has overall collected just 20 wins and 48 losses. This was coming for the team as not only is the team inexperienced but has not been built to make a deep Playoff run. This has been a season to shore up the talent level of players like rookie Josh Giddey, stellar scorer Shai Gilgeous-Alexander, two-way wing Lugeunzt Dort, and a bunch of other young players like Darius Bazley, Jeremiah Robinson-Earl, Tre Mann, Ty Jerome, Aleksej Pokusevski, Isaiah Roby, and some other young talent.

While Shai has been a constant scorer, he is not an elite perimeter shooter and the Thunder has been one of the worst three-point shooting teams throughout the season. When the lineup of Giddey, Dort, Shai, Robinson-Earl, Favors, and Williams was playing regularly, the Thunder did field a strong defensive attack but things have been falling apart on that end since Giddey, Dort, Robinson-Earl, and Williams have been sidelined. There is a lot of promise in the youth but an inconsistent frontline, low percentages from beyond the arc, and various other issues have plauged the Thunder team throughout the season, this is a team that is among the worst teams in the offensive efficiency after all.

Points Range: The Spurs have been a better offensive team compared to the Thunder and they are a way better passing team than them. They have a better scoring unit and more shot creators so scoring has been a prime agenda for the team. On the other hand, the Thunder’s defense has struggled as much as Spurs lately and no team has had a definitive edge there but I believe the Spurs have a chance of doing better on that end considering Thunder’s lack of firepower. The rebounding battle can be won by the Spurs with Poeltl, Murray, and Johnson packing the boards but Bazley, Roby, and Pukosevski have done decently too. I believe the total points range here is 230-240.

Prediction: The Spurs have an edge here due to their more balanced scoring unit but without McDermott, their floor spreading capabilities have been curbed. On the other hand, the Thunder has been playing some underwhelming basketball lately and if Shai ends up missing this game, I think their offense is likely to fall apart completely. Irrespective of Shai playing or not, I will take the Spurs to win 126:107 here.