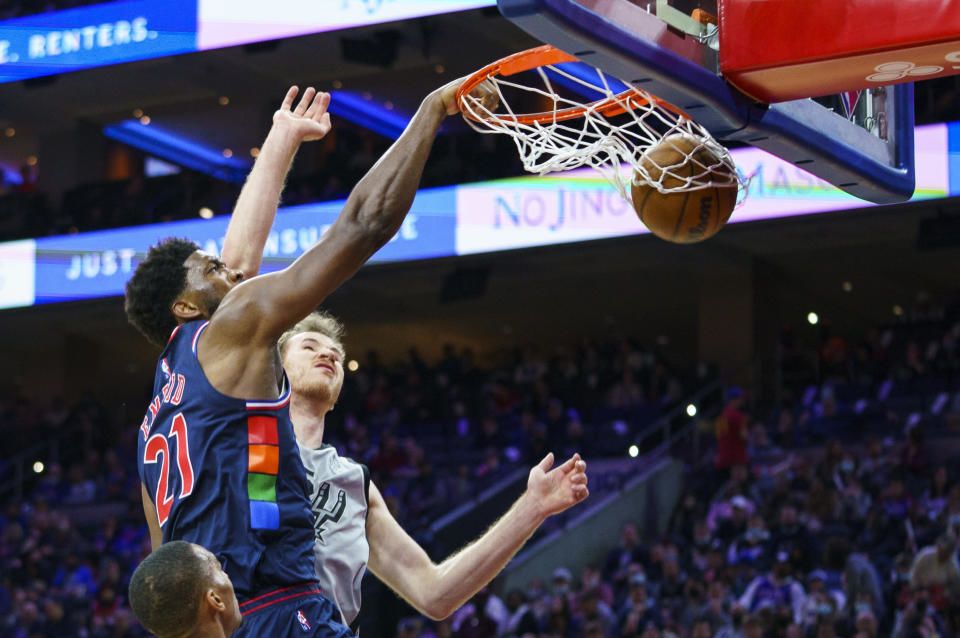 The NBA midseason window is here and well, with the trade deadline nearing, we can see some teams pull of major moves and exchange players and picks to address multiple issues, i.e. move an unfeasible contract, parting ways with players who are not content with the role, or fill up the lineup deficiencies. Perhaps these trades can change the fortunes of some teams and I feel there can be some big-time moves coming up soon. And it surely will cause lineup shuffles and affect the betting scenario. Anyway, in this game, the San Antonio Spurs and the Philadelphia 76ers will clash against each other.

The Spurs have 17 wins and 29 losses, struggling to stitch together wins and this month, they have lost ten games and just have three losses. Well, for a rebuilding team, such returns are not that surprising. On the other hand, the 76ers have won 26 games and have lost 19 games, which is not a formidable return so far for the team that had the best record in the regular season in the Eastern Conference during the 2020-21 season. The 76ers have lost two out of three last games but overall, they have won seven games and lost three games this month. Spurs largely depend upon DeJounte Murray and their offense has struggled late in the game while their defense is usually on the short side. Meanwhile the 76ers are way too dependent upon Embiid, who is giving MVP-level contributions but the lack of bench has hurt all season long. Can the Spurs win one against a team that has fared way better than them. For my game total and result prediction, jump to “Expert Betting Tips”.

Spurs’ defensive troubles, Embiid is taking most of the burden for Philly

Spurs lack of defense and too much load on Murray

Spurs had a decent 14 wins and 19 losses record (compared to now) by the end of December but when Murray went down, they lost the trail and then when Murray returned, other key players like Johnson, McDermott, and White missing from the picture, the San Antonio team crumbled even further. Well, this took the air out of the campaign and this month has been the most difficult in the way the team has lost. Anyway, if you think about it, not many expectations were placed upon the team but the absence of their starters really hurt the team because it happened during a critical juncture.

Well, one of the troubles for Spurs has been their over-dependence on Murray, and the offensive burden means that his defense is affected. Once he sits early in the fourth quarter or late in the third quarter or at any point, the Spurs fare poorly and lose any advantage or concede big leads. Murray leads the team in scoring, assists, and steals, which sumps up his value for the team. Derrick White acts as the second playmaker and can also dip in points while Jakob Poeltl has been active for the most parts and has been a terrific presence on the rebounding end and clinching some points. Keldon Johnson is a promising prospect but he has ways to go. Lonnie Walker IV has not done well while Devin Vassell can be an effective guard too. Overall, the Spurs’ defense holds them back and they are in rebuilding mode.

Joel Embiid is having an MVP-level season and his scoring has gone on another level, and I believe no player has scored as much as him this month on average. Joel has scored 40, 50 in the last two games, and mostly has breached the 30 points mark this season. Usually, this also indicates one other thing, it means that he is carrying the major burden on the offensive end for the 76ers. The trouble is that apart from him, only Harris and Maxey can help out on the offensive end and Seth Curry has been injured and in and out of the lineup these days. The lack of bench has also hurt the 76ers.

My concern with all the Joel-centric approach is that there is a lack of balance and sure there are some players in the league who can change the landscape even in the postseason, the big has a history of injuries and he can run into exhaustion if the team doesn’t attain balance on the offensive end. The 76ers have done well on defense and they have the potential to become an elite offensive squad because of Embiid’s presence but I think they need to trade for something like Tate, Gordon, or a player of that calibre at least and if possible, lend a high-quality playmaker. Can the 76ers sustain the Embiid-based effort for long?

Points Range: The Spurs were scoring 110 or more on a regular basis earlier in the season, especially till late December, however, lately, the team has not scored 110 or more on a regular basis. Against elite defenses, the Spurs have kept the ante up till third quarter but except for a few games, their fourth quarter performances have been underwhelming on the offensive end compared to earlier quarters. On the other hand, the 76ers have scored 109 or more regularly this month but has scored 101 or more in two of the last three games. However, the Spurs defense has also allowed 110+ points on a regular basis. Despite the 76ers' hurt team balance with Curry and Green out, Joel is an ace up their sleeve. I think the Spurs will score more than 105 at least while the 76ers will get close to 110. I think the total points range here is 220-230.

Prediction: Well, considering the overall record, the 76ers have done a better job at winning than the Spurs. But yes, the team has lost two of the last three games and this game plays a crucial role in getting their rhythm back against a vulnerable team in the Spurs. For the 76ers, containing Murray will be a priority but yes, overall the Spurs seem to have more shot creators. This is a game where Devin Vassell will have to step up the game and make sure that the Spurs churn out the bench advantage against a thinned-down 76ers team. But, how will the Spurs contain Embiid? He can by himself take over the game and create a gulf early on. I believe this is not a clear-cut game and the Spurs will pose a resistance here but the 76ers have the edge. I think they will eke out a 113-109. Overall, I feel that the Spurs will not let the 76ers run away with this.