San Antonio Spurs vs Miami Heat: Heat is rolling, Spurs can put up many points 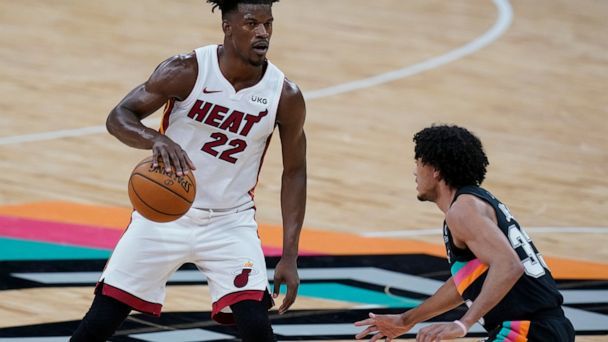 The NBA season keeps getting challenged as a mountain of COVID-19 cases and some injuries here and there are rendering various teams shorthanded. Still, somehow, the league has kept going on and on, thanks to relaxed quarantine rules and the provision to sign replacement players. Anyway, in this game Jimmy Butler led the Miami Heat to visit the San Antonio Spurs. The Spurs are without DeJounte Murray, who is in the COVID-19 protocols. Miami Heat has won four in a row and has 22 wins overall along with 13 losses. The Spurs have 14 wins and 19 losses, winning three out of their last four games, losing the last game versus the Jazz without Murray. Can the Heat continue their winning or will Derrick White and co. pull through? For game and total prediction, go to “Expert Betting Tips”. For a quick look, hop over to “Notes”.

Heat’s vast talent: Jimmy Butler has done a great job since he has been back as he has given scoring, playmaking, and defense. Meanwhile, Tyler Herro has also given great production as the sixth player for the team. On the other hand, Duncan Robinson can also help out a long-range shooter while Caleb Martin and Gabe Vincent have also given decent returns as the two role players. Thus, Heat have all types of scorers, an off-the-ball threat in Robinson, two isolation options in Herro and Butler whereas Omer Yurtseven has given superb inside scoring using his varied skill set. Still, Lowry’s presence is missing as he is a huge factor on both ends of the floor and can help his team out in multiple areas. Meanwhile, PJ Tucker’s defensive edge is also required while Dewayne Dedmon and Bam Adebayo are also going to miss significant time. Still, Heat has done well with the second string units too.

Spurs without Murray: Dejounte Murray has led the Spurs in points per game, assists per game, rebounds per game, and steals per game. He is their ultimate wizard and his absence can certainly cause fluctuations and it could be felt when the team lost to the Jazz during their last game. Still, if White, Keldon Johnson, Mcdermott, Poeltl, Lonnie Walker IV, Devin Vassell, and Bryn Forbes, the team has a massive amount of shooting, playmaking, rebounding, and can mount up a more than decent unit. The Spurs have depth scoring-wise and Derrick White can run the offense as well as Murray. Yes, the team’s already fragile defense can take a further hit but even then, they can remain competitive.

Prediction: Murray’s absence certainly hurts the Spurs on multiple ends and one could feel that in the loss versus the Jazz. I believe that the Spurs will score more than 104 here despite Buttler-lead Heat’s defense. In the meantime, the Heat can pitch in a substantial offense when Buttler, Herro, Robinson, and Vincent are healthy which means there can be around 107-115 points. In my opinion, the Heat will come through in this game 117:110.