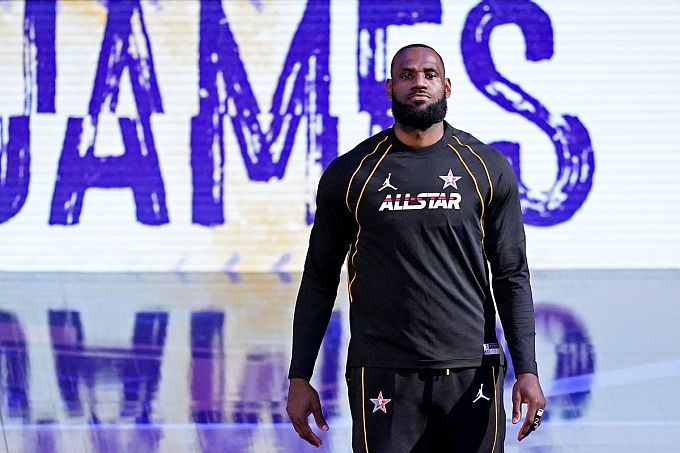 Team LeBron has won the NBA All-Star Game four times in a row with different lineups. Last year, Team Durant got the taste of it, having to make do without their captain once again. In 2021, KD and company lost by 20 points, but will they be able to put up a decent fight this time?

LeBron James always picks a killer lineup for the All-Star Game, and that must be why he's won four years in a row. In 2018 the team beat Curry (148-145), then outscored Giannis twice (178-164 and 157-155), and last year LeBron beat Durant 170-150. Nikola Jokic, DeMar DeRozan, Steph Curry and Giannis Antetokounmpo will be in the starting five along with the King, while Luka Doncic, Darius Garland, Chris Paul, Jimmy Butler, Donovan Mitchell, Fred VanVleet and Jarrett Allen will be in reserve. The latter, by the way, replaces the injured James Harden, giving LeBron a backup center on his team.

Kevin Durant will not play in the All-Star Game again due to injury, but he did participate in the draft. KD's starting lineup will include Andrew Wiggins, who went to Cleveland thanks in large part to the viewer vote, is the biggest question mark. Thai musician BamBam supported Wiggins with a Twitter post, and the fanbase did its part. Nevertheless, Wiggins is having a good season at Golden State, and his credit for the Warriors' success is quite great.

In addition to Wiggins, Joel Embiid, Ja Morant, Trae Young and Jayson Tatum will play in the starting lineup, while Dejounte Murray, Zach LaVine, Karl-Anthony Towns, LaMelo Ball, Rudy Gobert, Devin Booker and Khris Middleton have been placed on reserve. Ball and Murray were not originally scheduled to play the All-Star Game; they ended up replacing the injured Draymond Green and Kevin Durant.

Team Durant had quite a few questionable characters last year: Zion Williamson as the starting center and Mike Conley on the bench. There are questions now, but compared to 2021, KD and company are definitely stronger. Instead of Bradley Beal and Kyrie Irving, they will start with a pair of speedy Morant-Young defenders who share the ball more often and find creative solutions on offense. Morant scores incredible under the basket this season and that will come in handy in the All-Star Game.

Team LeBron looks very potent on paper, but it will be difficult for Nikola Jokic to showcase all of his strengths in this situation. In Denver, the Serb plays a lot with the ball and finds partners, and right now he'll be shadowed by DeRozan, LeBron, Curry and Giannis. Antetokounmpo, who hit 16 of 16 shots from the field at the last All-Star Game, could be his biggest problem. Durant also has basketball players capable of solving the outcome single-handedly, even Tatum is gonna be on fire. Kevin's team also has better defense, but that will depend on whether the players can hold on too much. In any case, we should expect a fight more intense than last year. I suggest betting on the following outcomes: