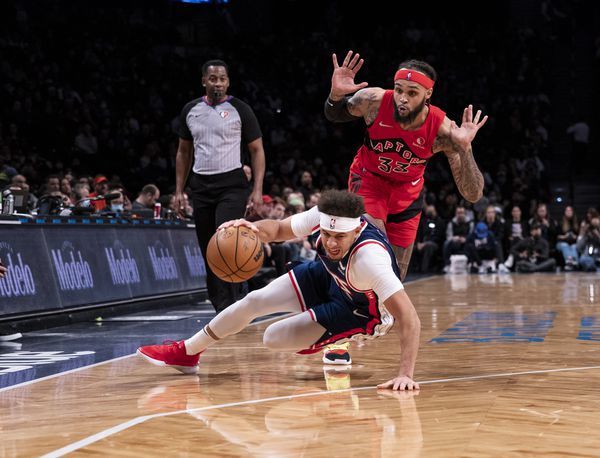 How weird it is that when the season begins, we place certain expectations upon certain rosters, how they will fare in the long run, what team composition will bring what results and then we discover, well, the results are not even close to what expected. So many storylines have transformed this season that has ached the hearts of many fanbases who were excited at the beginning of the season but are now in tatters. The Los Angeles Lakers come to mind and the other one is one of the most underwhelming parts about the Nets as their trio of Harden-Irving-Durant wasn’t even seen for most parts during a forgettable two-season run together. The Westbrook-James-Davis trio has fared way worse, and well, this has been a tough season for the “Big Three model”. And as the Toronto Raptors face the Brooklyn Nets, they look to solidify their place in the league using their lineups mostly built through the draft.

The Raptors have shown tremendous compared to last season when they were not even in the limelight. Their rookie Scottie Barnes has transformed the landscape on both ends of the floor while Siakam, Fred Van Vleet, and Gary Trent have clicked too. However, they have had some struggles since the second week of February. But yes, even then, a 33 wins and 27 losses record means that they are a solid squad. Meanwhile, the Nets have had a topsy-turvy season. So topsy-turvy that James Harden had to be traded and Kyrie Irving practically remains eligible to play in most games this season. This has caused a lot of turmoil and coach Steve Nash has had no luck so far in terms of fielding a full-strength lineup regularly for two seasons in a row. Acquiring Seth Curry helps but when your team is playing a second-string team for most nights, results will not mostly be on your side. Can the Nets avoid two losses in two nights against the much more equipped Raptors? To know my game total and result prediction, hop over to “Expert Betting Tips”.

The mid-tier battle is interesting

Can the Raptors make a push for the sixth spot in the East?

The improved play of the Celtics has propelled them to the sixth spot and which team is behind them; Raptors. If one can secure a top-six spot in the Conference then the squad can avoid the Play-in tournament and advance to the first round by the virtue of being in the top six. The Celtics have three more wins than the Raptors as of now but yes, they have also played three more games overall. This means that Toronto can still catch up with the rising Boston squad and make sure that they secure a bye to the first round. And that means the current window where the team will play a vulnerable Nets then two of the worst teams record-wise in Pistons and Magic can help the issue.

The issue for the Raptors recently has been that their major player OG Anunoby has been injured while the starting five has been asked to do major lifting. One huge positive has been that Scottie Barnes has improved offensively consistently but yes, Gary Trent Jr. needs to get back in his January groove. However, defensively, much of the roster is well-equipped and can create a lot of ruptures. Siakam was also on fire like Gary during January but he has been shooting abysmally from the floor since mid-February. This is why the often effective defense has collapsed for the Raptors. The Raptors need to find a way to stay more efficient and thankfully for them, bench Center Precious Achiuwa has found the back of the net quite a bit recently.

Nets’ season has been awful

The Nets are in midst of an awkward season. This is a team that was on the top of the Eastern Conference till December but an injury to their superstar Forward Kevin Durant changed everything. Not only the offense was compromised but the defense also took a severe hit with him gone. This also shows the lack of Nets roster that has also played without their sharpshooter Joe Harris for most parts. Kyrie Irving has largely been a part-time player but if he becomes a regular, the state of Brooklyn can improve drastically as his 30+ points game against Bucks indicated.

Simmons’ Nets debut date remains up in the air but in the long run, a lineup of Irving-Curry-Simmons-Durant-Drummond holds a more than a decent promise. The scoring balance can be restored and if I were the coach, I’d utilize Simmons as a Point Forward at this point, someone who can drive to the rim, create shot opportunities, and take on the best offensive perimeter player of the opposing squads. With that squad, the team has three high-quality shooters in Curry, Irving, and Durant, three top-notch rebounders in Simmons, Durant, and Drummond while Simmons and Durant can be strong defensive. But the question remains, when will Simmons return?

Points Range: Nets' offense has been in tatters these days and that is largely due to the lack of shot creators and playmakers. Patty Mills has lost his shooting touch completely after starting strong and that has also created ripples. Perhaps he fared better when Durant was in the lineup and had multiple defenders attached to him. On the other hand, the Raptors offense hasn’t brought many laurels either but yes, against a weakened defense of the Nets, even the deep bench players can have their chances. The Raptors do need more efficient production from both Gary Trent and Pascal Siakam at any rate. I believe they will score 115-125 points here while the Nets will score around 100. I believe the total points range here is 220-230.

Prediction: The Nets were blown apart by the Raptors yesterday when they won by a humungous margin of 36 points. Surely, this indicates the massive differences between the two rosters but that blowout win wasn’t much of a surprise considering that the Nets are virtually missing three of their starting level players at this point. If Fred Van Vleet plays here, then the Raptors will be even more formidable, however, I expect the Nets to play much better in this game. Still, I see the Raptors taking a 120:107 win here.