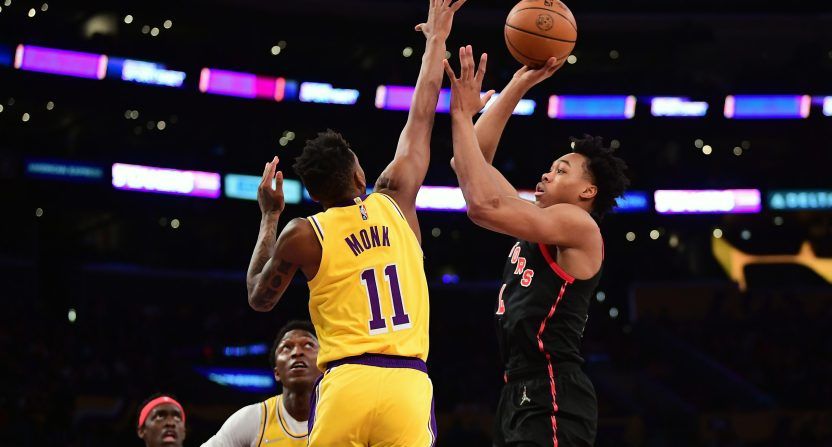 Hello NBA fans, how is it going for y’all? The NBA betting scenario really is a challenging one, with a wavering scoring line, the up-and-down nature of teams, and the fact that you never know when a bottom-feeder can rise up and claim one every now and then. The home and away from home scenarios make a bunch of differences but in the end, it is the quality of the basketball on a consistent level that makes the major difference. And one of the teams that have struggled to maintain any consistency is the Los Angeles Lakers and here they will take on a streaking Raptors.

Raptors have regained the plot

The Raptors are on a five-game winning streak, and this comes after they had lost three in a row. The best part about the winning streak for the Raptors was that all the wins came on the road and the team finished with five wins and one loss record in the lengthy Western Conference away from the home road. This stretch is also huge for one another reason, now the team has to play nine of the next 13 games at home but yes the window in terms of playing the quality of teams is a little tricky. However, overall, the Raptors have drawn even with the Cavaliers in terms of record and can end up seizing the sixth spot at least.

The major difference-maker apart from the regularly effective all-around PF Pascal Siakam has been Small Forward Scottie Barnes, a rookie who has been at his scoring best. On the other hand, although Gary Trent Jr. has been inconsistent in terms of scoring, he has provided elite defense. Fred Van Vleet has continued to be a strong 20+ points scorer while bench big Precious Achiuwa has done well. Still, the team will need OG Anunoby sooner or later to share the load on both ends of the floor.

Lakers have lost the plot(Again)

The Lakers seem to play just more horrid basketball with each week. It is amazing(or awful) that the team’s point differential in terms of losses is only increasing at this point. The elite teams love facing the Lakers because they know it is usually an easy victory in the bag. They have lost three games in a row, and if we take into account when they win two games in a row last time, it was in the first week of January, when the team went on a four-game winning streak. They have won just eight out of the last 29 games and that is one of the worst records in the league during that period. The situation is surely alarming in the Lakers' land.

Although LeBron James continues to make a mockery of the opposition’s defenses, the help has been rather thin especially since Davis has been out. Westbrook continues to struggle at the one-guard position as a scorer and playmaker, hitting the lowest bar of his career. Malik Monk is not as consistent offensively as he was before while Carmelo Anthony is a supplementary player who can’t will a team to wins single-handedly anymore. Talen Horton-Tucker’s inconsistency has hurt the guard depth further while Austin Reaves has been showcasing some spark but he is not someone who can all alone take the team out of the shackles. The Lakers are at this point struggling to hold on to a Play-in spot.

Assuming these players are available, these are my player-based props predictions:

Points Range: On average, the Raptors have been miles ahead of the Lakers when it comes to the offensive end these days. They have scored in the 114-119 points range largely these days and on the other hand, the Lakers have mostly been in 103-105 points range against above-average defenses and this is not a shock considering how the team has been struggling without Anthony Davis. In the last meeting, the two teams fetched 217 points with the Raptors scoring just 114 points. I believe the total points range here will be higher range and in the 220-230 points range this time around.

Prediction: The Lakers have been horrible away from home, winning just nine of their total 32 games. They have only won two games against 50%+ win teams since the beginning of the season on the road. On the other hand, the Raptors are not that stellar at home but they still have done well against struggling squads like the Lakers. I believe the Lakers will do better than the last game but will ultimately fall 118:107 to the Raptors.