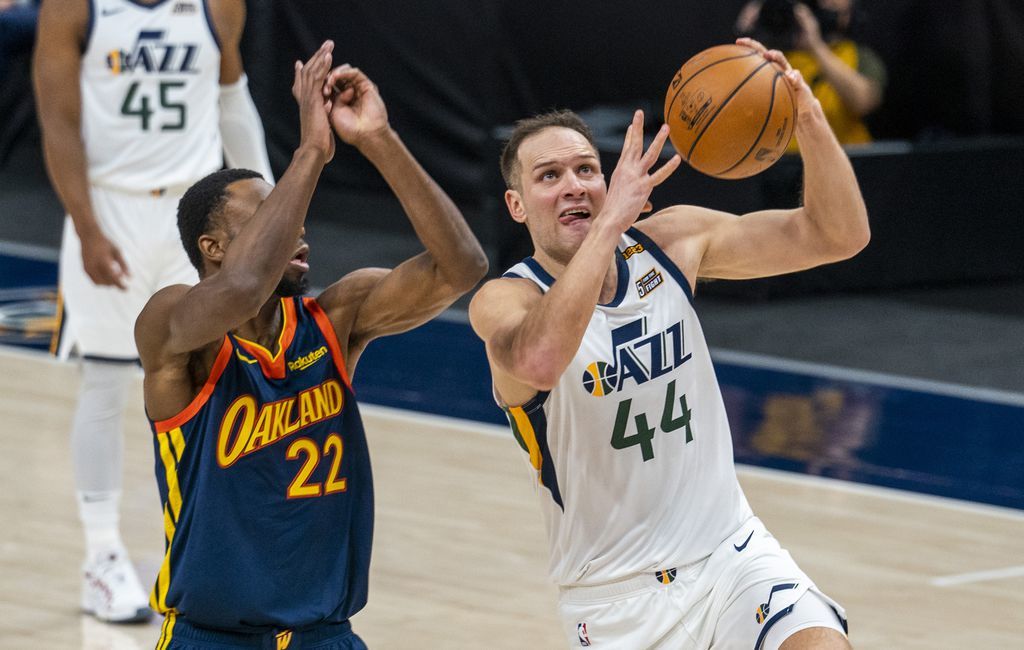 Let us talk about one of the most high-octane match-ups this season. The game between the Utah Jazz and Golden State Warriors. Jazz has 26 wins and just nine losses while Warriors have an incredible 27 wins and seven losses so far and the stellar records speak for themselves in both cases. The Jazz is on a six-game winning streak while the Warriors lost the last game 86:89 in absence of their two-way superstar Draymond Green. These are two teams that are among the deepest and winningest squads this season and thus, a potential for a thrilling game becomes high in this case. The Jazz has a strong lineup from Point Guard to Center position and have been way healthier than the Warriors for the past two seasons, meanwhile the Warriors continue to deal with multiple absentees and have been in tough positions recently. Can the Jazz continue its win-streak or will Curry and Co. wag their fingers once again this season? For my total and game result prediction, jump to the “Expert Betting Tips” section.

With Poole, Curry, and Wiggins around, the Golden State Warriors have three options who can score in many ways. These three can be isolation scorers, off-the-ball shooters, and also make space off cuts, screens, and in various other ways. Yes, with Draymond Green, the ball rotation can take a hit but the team still can throw the ball to these three players and hope they work some magic. I believe in this particular game, Wiggins and Curry will combine for something like 55-60 and I have a feeling that Curry is going for a big night here that will challenge the Jazz’s defense big time. Apart from these three, the Jazz can’t take reserves Gary Payton II, Toscano-Anderson, Otto Porter Jr., Andre Iguodala, Jonthan Kuminga, Nemanja Bjelica lightly. Payton II is superb at disrupting the opposition’s offense and gets some big time slam dunks to propel his team forward. Iguodala has acted as a playmaker off the bench and he can slide into the Draymond-Green like role on both ends off the bench. This current unit has all potential to go past 110 or so. The Jazz defense will have to watch out those open shooters due to the suction created by the offensive prowess of Wiggins, Poole, and Curry.

Jazz’s offense is even more well-oiled

Donovan Mitchell is no less an intimidating option on offense than Curry and has lodged 30 or more in multiple games this season. Clarkson is a big-time 16-22 points scorer off the bench, Bojan Bogdanovic can light it up from the field for similar numbers, while Rudy Gobert can provide a lot of scoring in the paint. With Mitchell, the rest of the players get more space to operate and the offense works smoothly. Ingles can act as a second playmaker off the bench while Mike Conley, the starting one guard, is a two-way threat for many seasons now. Gay and Whiteside can fill in for decent minutes and overall, offense is not in short supply for the well-seasoned Utah team. The Warriors can have trouble containing the dribble penetration of Donovan Mitchell, who has been surrounded by a bunch of high-profile shooters, drivers, cutters, and a sustainable inside threat in Gobert. With Gobert, the team also gets paint protection. Overall, the Jazz can shut the shop early in many ways with their all-around weapons.

Points Range: The Jazz and Warriors have at least breached the 110+ points mark in most of the games. The Jazz has scored more points than the Warriors this season and ranks number one in the league in terms of points per game. The team has scored 120 or more in four of the last five games and a night under 110 or so can be considered a low-scoring one for the Jazz at this point. The Warriors scored just 86 in the last game without Draymond Green. Still, I have no doubt in my mind that the team can extract 110 or so with the Poole, Wiggins, and Curry combination at the helm. I believe the total points range here can be different from most Jazz games. This can be a 213-223 points range game here.

Prediction: When facing the Warriors, you have to be careful about their third-quarter runs. With Steve Kerr’s led Warriors, the third quarters are where the Golden State outfit makes that one big run, concentrating on both ends of the floor, thus, even a big-time team like Jazz will have to be careful. On the other hand, the Jazz is the type of team that jumps on you and gets an early 10-15 points lead and keeps extending it to throw a comeback out of the window. I feel the Jazz will be more confident here, playing at home, with a Warriors team that lacks Draymond Green. Still, even then I feel the Warriors have the advantage over the Jazz, a very very very slight one in my opinion. I feel they will win this one 116:111. This bet is 69% risky, a safer bet is Jazz’s win and the team going past 112 I feel.

If Curry plays then these are the odds