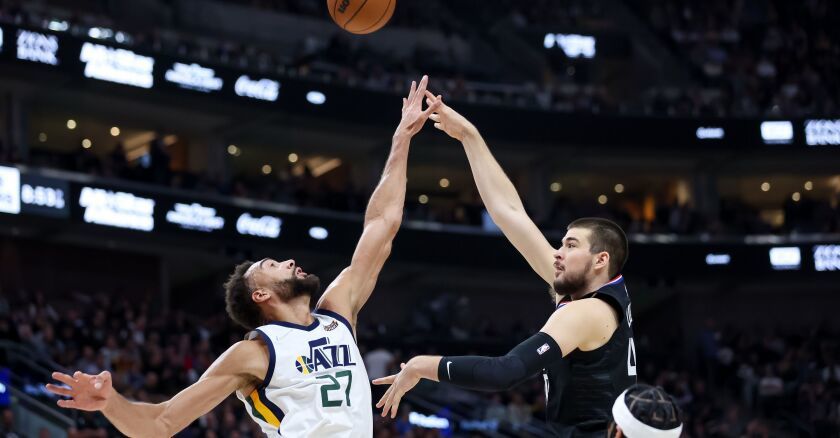 NBA betting scenario is chaotic and we can be sure that things are only going to become more chaotic as multiple teams make a push towards the Playoffs. And with the Playoffs nearing, we are going to see a bunch of teams at the peripheries of the top-six and the Play-in tournament make a firm push. Not only are a lot of Playoffs positions are at stake, but there is also the problem of injuries that are now haunting some of the top squads in the league. So as we await the final seedings for the Playoffs, the hustle and bustle for various teams are mounting up. So, to add to another chapter of the remaining Regular Season, let us examine the battle between the Utah Jazz and the Los Angeles Clippers.

The Jazz is in a highly riveting battle for fourth place versus the Mavericks and the Nuggets. The Mavericks have especially been close, and both the Jazz and the Mavs have an equal record of 43 wins and 26 losses. However, recently, the Jazz has been rather inconsistent, losing half of their last eight games at home and of course, the absence of Bojan Bogdanovic has hurt them a little. The team will have to play six out of the next seven games away from home and except for the game against the Knicks, all games are against the postseason bound squads.

In this particular game, the Jazz has been highly hurt with Donovan Mitchell being ruled out along with wing Bojan Bogdanovic. While Mitchell has been the leading scorer throughout the season, Bogdanovic provides balance at the offensive end as the scoring wing. With these two not playing here, the team will need a big night from Clarkson and Conley at the guard positions, so, yes the chances of winning this game have dwindled considerably with two of the top three scorers for the team ruled out. Gobert and Conley will have to run some strong sets here because you can’t sleep on the grit of the Clippers.

While the Clippers have somehow held on to the eighth position and are likely to finish at a spot where they can feature in the Play-in tournament. However, the upcoming schedule is rather unforgiving considering seven of the next ten games are against high-quality squads. This is surely coming at the wrong time for a team that has played without two of their best players for most of the season now and one of them in Kawhi Leonard can be out for the season. On the other hand, the news regarding Paul George isn’t promising either and the Clippers have been running thin with their high-yielding wing Norman Powell also being out of the mix.

Throughout the season, the team has been able to get out of the funk more often than not. Currently, they are on a two-game losing streak and have only won two out of their last seven games. This is a troublesome scenario because even if the Clippers seize a Play-in spot, it will not be easy if at least one among Powell or George may not make it this season. While Reggie Jackson has been a superb ballhandler, Marcus Morris has given the great depth at the perimeter and Zubac has been playing his best ball recently, a lot will depend upon how the supporting cast of Mann, Kennard, Hartenstein, Covington, and Coffey perform will determine the team’s trajectory.

Points Range: The Jazz has been majorly a better offensive team than the Clippers but with the absence of both Mitchell and Bogdanovic, their scoring balance will be hurt. On the other hand, the Clippers are inconsistent in terms of scoring and don’t score 110 or more often. They have been mostly in the 102-106 points range these days. On the defensive end also, the Clippers have been rather inconsistent but they have improved compared to last month while the physicality of O’Neale and Gobert helps Jazz on the defensive end. The absence of Mitchell and Bogdanovic can hurt the overall points range in this game and I believe it will be in the 210-220 range.

Prediction: The Clippers have been doing a decent job at winning away from home and their chances will be decent against the Jazz that will be without two of their key players. This is why I believe this will be a close battle, however, I still see Conley, Clarkson, and Gobert coming strong on the offensive end to make up for the lack of scoring balance. However, I also see the Clippers coming up with a strong game and a close battle can ensue between these two. I believe the Jazz will ultimately edge out 110:106 but I still give the Clippers a more than handsome 45% chance of winning despite playing away from home.