Utah vs Portland Prediction: the Blazers to Deal with the Losses 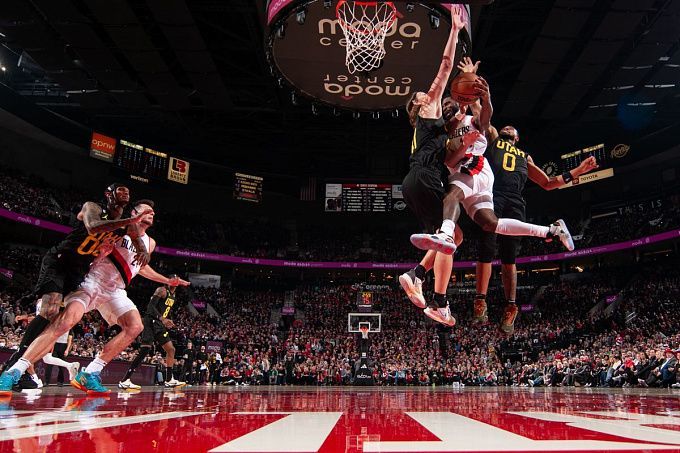 Another game day in the NBA will end with a matchup between Utah and Portland. The Blazers have already lost to the Jazz this season, and the odds of a win for the visitors have increased slightly. Should we believe in revenge and bet against the favorite?

The Jazz has been unstable of late, performing their five-game losing streak highlighted by two straight wins. Utah has a tougher time without Mike Conley, as he is the team's primary and perhaps only playmaker and helps out on defense. Will Hardy's men are very tight up front but miss too much in the paint. Lauri Markkanen is still great, and over the last half month, he's averaging 24.1 points and 3.6 three-pointers. He used to miss a lot of open three-pointers, and by improving that, he's closer to being an NBA all-star. Jordan Clarkson is also having a very even season, and Collin Sexton is slowly gaining form. In addition to Conley, Rudy Gay is injured, although he should be back anytime soon.

Utah defeated Indiana 139-119 in their last game. Five Jazz players earned 16+ points in that game, and it was surprising to see Walker Kessler among them. The big young man made 7 of 7 shots and had two blocks. Malik Beasley and Lauri Markkanen combined for nine threes, but the lion's share of Utah's points came in the paint. It did not hurt that Will Hardy's team had 26 turnovers and poor defense: the Salt Lake City club was much more efficient in finishing offensive plays.

The Blazers have lost 8 of their last ten games occupying the 10th line in the Western Conference, although they were among the leaders recently. Damian Lillard's injury hurt the team badly, and Portland's star player will miss the game against Utah. That said, Anfernee Simons and Jerami Grant had a good stretch, averaging over 25 points, so the role-players are worth more blame. Portland's bench is getting shorter as Nassir Little dropped out the day before, and Trenton Watford is likely to replace him. Josh Hart is also injured, and his participation in the Utah game is highly questionable. Drew Eubanks may not play either, and the date of Gary Payton's debut this season is still unknown.

The day before, Chauncey Billups' team failed on the road to Los Angeles Lakers, 109-128. Because of Hart's absence, Portland had a big starting five. Trenton Watford, Jerami Grant, Justise Winslow, and Jusuf Nurkic came simultaneously on the floor. The Blazers' offense was decent, as Winslow scored 21 points on 9-of-11 shooting, and Sharp also came off the bench. Simons and Grant threw less than 50% of their shots, but that was better than poor defense. Portland missed a lot in the paint, and Hart could be useful at the arc.

The Blazers lost to the Jazz in their last six faceoffs, but even with severe roster losses, Portland has a chance to end their losing streak. Utah is far from perfect, especially in the paint, and Chauncey Billups' team poured in 64 points from that area. And a lot will depend on the starting five. Despite the absence of Little and Hart, the visitors have great defenders. Winslow recently was among the best in the NBA defensive rating. The Jazz recently defeated one of the worst teams, and now the team should feel the contrast.