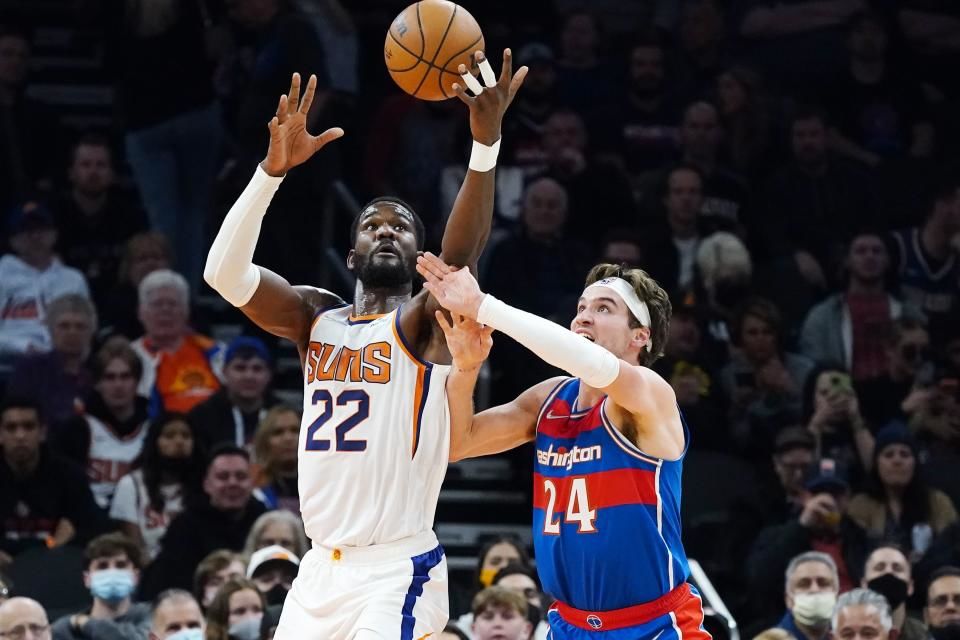 NBA trade deadline is here and the league is now filled up with various rumors already. Pull the plug or keep the core? That is one question that managements ponder over the course of the season and the trade deadline gives a chance to explore the market. The market is not only about management, there are various players who look for a change of scenery for a multitude of reasons. And well, with the deadline just five days away or so, I will not be surprised if we see a flood of trades. One of the teams here in Washington Wizards will also be most likely active in the trade market as they meet the Phoenix Suns.

The Wizards have 27 losses and 24 wins, and with each month, they had been falling off the radar, somehow in the Play-in Contention. Washington began the season with 10 wins and three losses but has won just 14 games and has lost 24 games since then, which is a bottom-ten record since that period. The team did the 76ers in the last game but there are glaring issues with this team.

On the other hand, Phoenix Suns have the best record in the league. They are only among the two teams with 40 wins so far and their 41 wins and ten losses record implies how brilliant they have been. They lost to the Hawks in the last game 115:124 but they were on an eleven-game winning streak before that. The team will play three games on the road to round off the Eastern Conference road trip. Can the struggling Wizards nip the bud here or will the Suns start another streak? For my game total and result prediction, jump to “Expert Betting Tips”. For my players-based statistics prediction, go to “Player Performance Prediction”.

The Wizards were on a six-game losing streak before the win against the 76ers. Well, the troublesome part is that during that losing streak, the team’s main gun Bradley Beal was also playing so the problem of losing games has now become endemic. The other troublesome part here is that the team lost four of their games on the home floor and didn’t take advantage of the homestand, which is essential during the long season. Wizards are once again in a similar territory as the last season, continuously losing games and figuring among the late Play-in entrants, and that meant an early exit during the 2020-21 season.

Point Guard Spencer Dinwiddie has not been making his shots, shooting below 30% or so in the last five games and his offense has not been clicking for a long time now. Caldwell-Pope has been forced to take more shots and even with his consistent output, he isn’t someone who can take over the offense. The Center position is in a logjam with Gafford, Bryant, and Harrell, and I wouldn’t be surprised if at least one of them will be traded. Wing Kuzma has been the most impressive Wizards player since January, scoring at a high clip and clamping on boards. The bench depth hasn’t gelled and for a team that doesn’t defend well, losses are of course going to pile up.

Suns’ push for the championship

Unlike the Wizards, the Suns have been winning a lot since the beginning of the season and have had two 10+ game-winning streaks, and they are only among the two teams to do that all season long. The Suns made the Finals last season and they are on course to replicate those heroics. The scary part for other teams is that they have been winning even more this season and their lineup has acquired more cohesion. Even if the Grizzlies and Warriors are on the rise this season, the Suns look primed to make the Finals.

The backcourt of Paul and Booker is certainly one of the best if not the best in the league. Wing Bridges, Johnson, and Crowder are incredible on both ends. Center Deandre Ayton has been doing a wonderful job of sealing boards, occupying the paint, and is a double-double threat once again. Meanwhile, the bench has been deep and there is a cover for injuries in the form of Jalen Smith, Bismack Biyombo, Landry Shamet, Ismail Wainright. The Suns are on fire and if they remain healthy, you can bet that they are in for a deep postseason run.

Assuming they are healthy, these are the player-based predictions:

Points Range: Phoenix Suns have scored 113 or more in six of the last seven games and they have been a high-scoring team since the start of the season. With Devin Booker exploding for 30+ points, again and again, the team can even get past 120 or so on a constant basis. On the other hand, the Wizards have struggled quite a bit on the offensive end scoring in the 98-106 points range recently, and with Beal out, there can be some tough nights on that end.

Defensively, the Suns have had little struggles recently, and they gave up 124 against the Suns. Otherwise, the team has been holding opponents to 109 or fewer points, and they have a penchant for sealing close games. Defensively, the Wizards have given up around 115 points on a regular basis and have not been up-to-the-mark on that end. I believe the Suns will score around 112 here while they will limit the Wizards below 108 here. I see the total points range as 210-220.

Prediction: Record-wise, the Suns have a lot more impetus than the Wizards heading into the game. Yes, they lost against the Hawks in a poor defensive show but the Wizards are not as formidable as the Hawks on the offensive side of the floor. I see Cameron Johnson having a strong game here while Ayton partying inside on the offensive end too and being destructive on the defensive end. I believe the Suns are in for a big win here and will take this game 115:104.