Real Madrid vs Barcelona Prediction: the Catalans are Winning Sometimes but Getting Off to a Bad Start 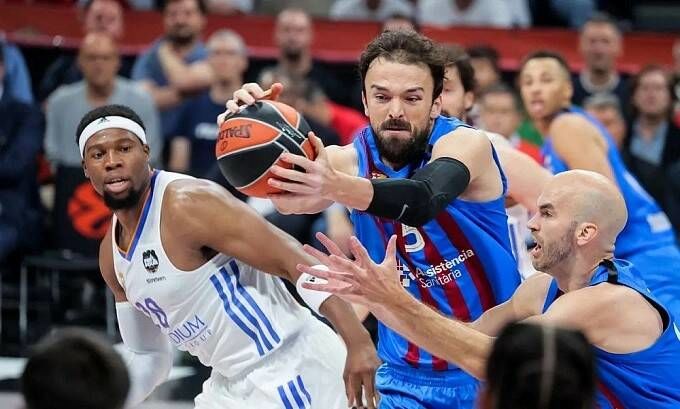 The Blaugrana magic worked in the second game of the series, though it took the Catalans a long time to catch it. There's some speculation that the magic won't go to Madrid with Barcelona because the climate there is too unsuitable.

In the previous match, the Madrid team made 10 more shots than their opponents. By the way, they scored more and lost only in the very end. Still, we shouldn't blame the refs for the loss: It's bad form to make five of 26 long-range shots.

Sixty-nine points is extremely insufficient for Real Madrid, even on the road, and they haven't earned less than 83 points in the playoffs so far. A bet with odds over 1.8 on Real's individual total over 78.5 is a logical choice. The Whites won't always be so desperate, especially at home.

The Catalans miraculously did not get 0:2 in the series. In the second game, they shot even worse than in the first and scored only 71 points. Barça's attack is not at its best for the third game in a row, and bookmakers offer odds of 1.8 on their total under 76.5. That's also interesting. By the way, in the playoffs, Real Madrid only once conceded more than 76 points.

On top of that, Jasikevicius's charges, again, are off to a bad start for the third game. That means they're gaining no more than 17 points in the opening quarters and failing. Still, Barça has won in the last three second halves.

In the fourth game in Badalona and both home games against Real Madrid, Barça was worse than its opponent in the two-point shooting.

So, something happened to Barça's offense, and that's why we picked

Barcelona's individual total under 76.5, and