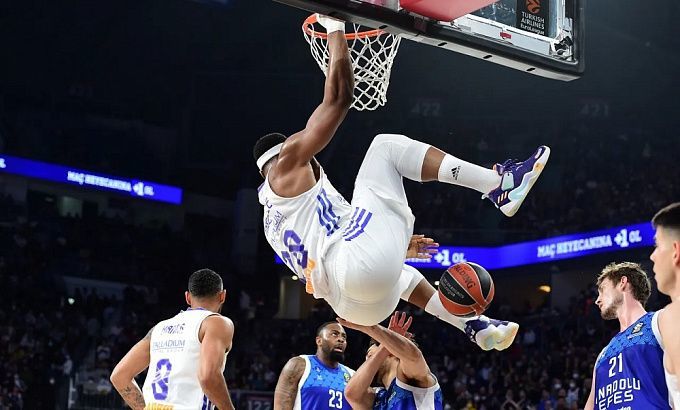 If we look at the results of the decisive matches of the Final Four in the last 20 years, we see that the under was reached only when Greek teams played if there were no Greeks, even the defeated ones scored at least 80 points.

Madrid played no better than Barcelona in the semifinals, quite frankly. They made 22 two-pointers and eight three-pointers, just as many as Barça. As we predicted, Real lost by 14:20 in assists. All that Lasso's team did better was make three more free throws. That's three points for Real.

The Madrid club is second to Barcelona in assists, but not Efes. The statistics say that Madrid's advantage on the season's average is relatively tiny. Still, it looked pretty significant in head-to-head encounters, even in the one in which Real Madrid lost - 20:13 in Istanbul and 19:11 in Madrid.

The Spaniards are inferior to the Turks in the two-point shooting. They often hit less often, but they shoot from mid-range and close range. Real was better both times in the regular season in terms of accurate two-pointers - 24:20 and 20:14.

What do Llull and his teammates use to run more offense each time? Certainly the rebounding. The season stats prove Real's superiority of six rebounds per game average. The results of the head-to-head meetings are 30:28 in Istanbul and 42:18 (!) in Madrid. We must keep in mind that the game in Turkey took place in late March and in Spain in late September.

Finally, Real Madrid never scored less than 82 points against Efes. Still, Anadolu's defense is not that of Barcelona. Bookmakers, meanwhile, are offering odds above 1.9 on Madrid's individual total over 78.5.

Istanbul could not even outscore Olympiakos from the paint and its surroundings - they lost 12:17 on two-point shots. They also missed eight free throws. All the same, their rebounding and foul totals were average. With what did Efes manage to win? Fourteen made three-pointers, including the winning buzzer, compared to only seven for the Pireans.

By the way, Efes has less than a one-point lead on average on the season and none at all in back-to-back contests. In contrast, in Istanbul it was 11:11, while in Madrid the home team was better, 12:8.

So, a minus handicap for Real on rebounds and two shots is requested, but the lines on the statistics will appear later, and in addition to rebounds, we suggest these