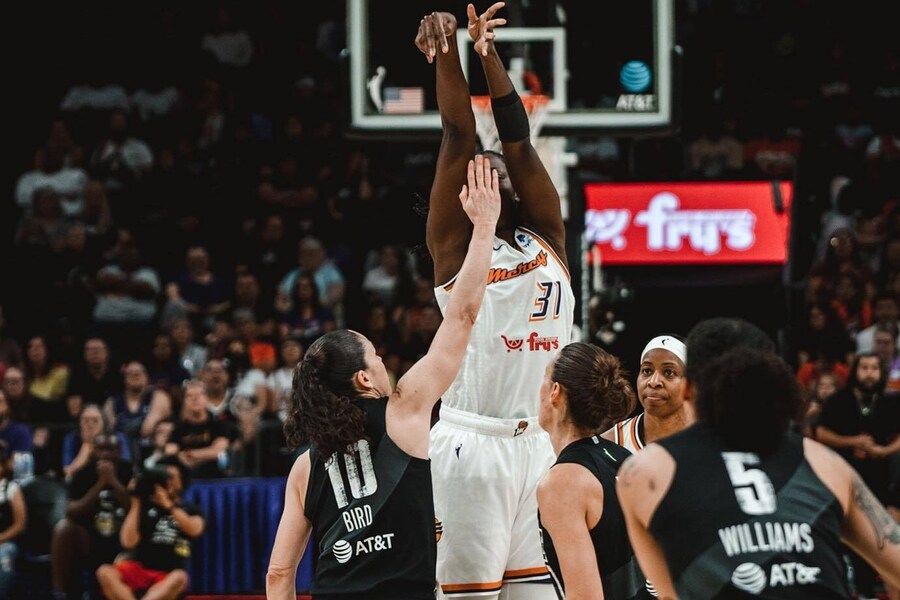 WNBA is in full swing and we have been blessed with certain intriguing battles already. The injury bug and COVID-19 have already plagued the league and they continue to be consistent spoilsports. Seattle Storm has also been hit with COVID-19 and they will host the Phoenix Mercury. This game will be a back-to-back scenario and Mercury beat the Storm in the last game 97:77 as Tina Charles scrapped up 22 points and 11 rebounds. For the Storm, Jewell Loyd scored 26 points but without Breanna, their effort crumbled. How will the Storm respond when they play on their home floor?

It is gonna be tough with Bre

The Storm looks like a completely different team without Breanna Stewart as they are left with only one major scoring option in Jewell Loyd. She did a great job in the last game, clicking on 9/19 shots and hauling 26 points, which included a brilliant turnaround fadeaway three at the buzzer of the First Quarter. Sue Bird also had a solid game, scoring 14 while dialing in four triples but the team was outmatched by the Mercury’s wealth of offensive options.

The defense of the Storm is also not the same without Stewart whose size helps in both the perimeter and inside defense situation. Magbebor and Talbot can be effective defenders but Stewart’s ability to rebound and run the floor is the blessing that the team will be without again. How will the Storm match up against the loaded Mercury again? They will need something special from Gabby Wiliams, who shot just 2/11 in the last game and is out of rhythm so far.

Mercury is still deep without Griner

The decision to bring in Tina Charles only sound more solid with each day as Griner remains away from the action. After a tough start, she showed what she is about and drilled 22 points on the 8/13 shooting but she had ample support. Diggins-Smith made half of her 14 attempts and clinched 19 points while Diana Taurasi turned back the clock and made four triples to get to 15. Diamond DeShields had 12 off the bench and the Mercury looks deep all of a sudden.

Sophie Cunningham continues to supply quality minutes while Shey Peddy has played at another level as well. Skylar and Shey had 6 assists each while Taurasi had 4 and the Mercury had 26 overall assists. They looked highly turned on and made 57.1% of their total field goals while clicking on 50%+ three-pointers. The return of Brianna Turner bolsters the defense and rebounding both, and to be honest, the Mercury can still end up making a deep run without Griner. Remember this is a team that made the Finals last season.

Points Range: The difference between the two squads boils down to the number of shot creators and without Stewart, the Storm is now dependent upon Jewell to produce the bulk of the isolation scenario offense. For the Mercury, they are both loaded with shooters and cutters, who can score off the dribble while being equally effective off the catch. They have three effective ball-handlers in Taurasi, Peddy, and Diggins-Smith, while having DeShields and Cunningham off the bench makes this one of the deepest guard rotations. The Storm will need more out of Gabby Williams while Magbebor will also need to be more efficient to counter the loss of Stewart. I believe this will be a high-scoring game and the total points range can be 170-180.

Prediction: Not having Griner surely impacts the defensive side of things but with the current setup, the Mercury can be effective in both open-court and half-court scenarios. The last game was won by Mercury with a huge difference of 20 and this surely was possible due to the absence of Breanna Stewart. Will the Storm bounce back here? I don’t think so, I believe the Mercury will win this 90:82.