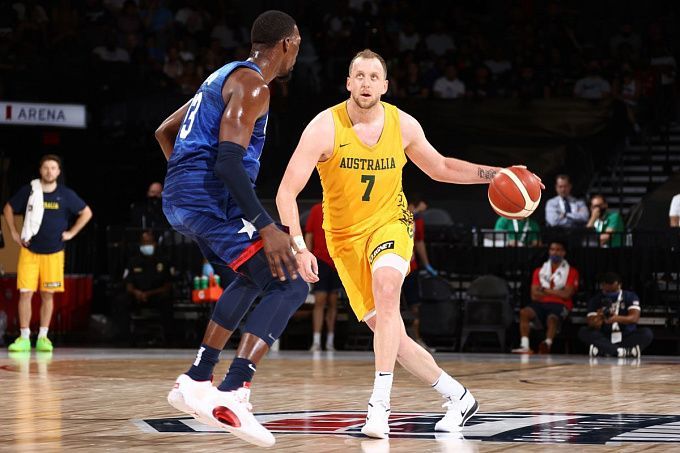 The US team has never lost an official match against Australia, but the Boomers beat them in a friendly before the start of the Olympics. Now the ticket to the finals is at stake, should we expect a sensational match?

Ten days ago, many had doubts about the prospects of the U.S. team at the Olympics: they had lost twice in friendly matches and against France in the first round of the Olympics. There are some rumors going around of conflict between the coach and some players. Nevertheless, the Americans are gradually gaining momentum now, as we can see by their confident progression to the semifinals. Gregg Popovich has been probably waiting for the best moment to make one of the best basketball players in the world get into the court. Kevin Durant is getting more and more playing time, and The Brooklyn forward is averaging 18 points per game now. Damian Lillard, Jason Tatum, and Jrue Holiday have dragged the team on offense in individual games. As for team statistics, the USA team is in first place in assists per game (50.5%), shooting from beyond the arc (42.8%), they have the most assists (27.3 per game) and blocks (5.0).

Gregg Popovich's wards easily defeated the Spaniards with a score of 95-81 in the Olympic quarterfinals. The first half was tight, but after the break, the Americans defended well and made 9 of 15 three-pointers. The USA team again played with great accuracy, making 28 assists. Their 14 steals per game were also impressive, as well as 8 turnovers in 40 minutes, a phenomenal performance against such a strong opponent. Kevin Durant was the hero of the game, scoring 29 points.

The Australians have a now 9 winning streak at the Olympics, after defeating Nigeria (84-67), Italy (86-83), and Germany (89-76) in the group stage of Tokyo 2021. So far, the Boomers have the best defense of any team in the current tournament, averaging 71.3 points per game. Patty Mills is the undisputed leader of the Australian national team: he is scoring 20.8 points per game and giving 5.3 assists. Aaron Baynes was injured in the course of the Olympics, but they managed to find his worthy substitute. Jock Landale is not only good at scoring from close: but also half of his shots are three-pointers. It just became known that Landale will play for San Antonio starting next season, giving the Aussies one more NBA player.

In their last match, Brian Goorjian's team defeated Argentina 97-59. In the 1st half it was not easy for the Australians and in at they were 8 points behind, but after the break, their defense improved and this decided everything. In 2 quarters the team allowed only the Argentianias to score 26 points and made 9 of 17 three-pointers. Joe Ingles, Matisse Thybulle, and Patty Mills each made 3 shots from beyond the arc and Mills was the highest-scoring player on the team with 18 points. In the defense, Landale and Tybull did a great job with 3 steals each.

The Australian team has been very good at defending so far, but they haven't come up against such strong opponents up to this point. It's one thing to defend against Nico Mannion, Moritz Wagner, or Facundo Campazzo, and another to guard Durant, Lillard, or Lavin. That being said, the game won't likely be played at a very high tempo, with both teams defending well and trying to create the best possible opportunities for a shot. The Americans are on a roll after a poor start. Yes, the Aussies are among the best in three-point shooting, but they will not be allowed to shoot from around at the arc this time. I would like to bet on the following outcomes: