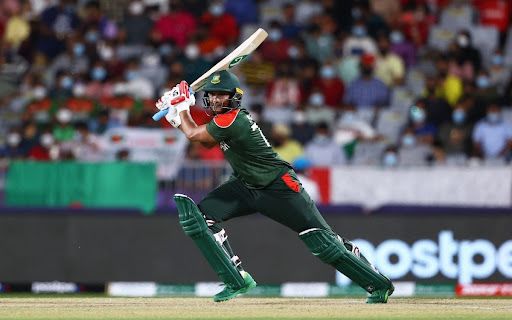 Two teams whose campaign is in jeopardy will cross paths in this Super 12s fixture. West Indies comes into the game after an eight-wicket hammering by South Africans. Meanwhile, Bangladesh lost its last game in a one-sided fashion. A defeat here will spell that one team is out of the contention for the Semis, who will it be?

Bangladesh has been playing some below-par cricket for the last game and a quarter. They seemed to have lost their way after a poor bowling and fielding performance against Sri Lanka and England gave them an even worse loss. In the last game, their batting, fielding, and balling all turned out to be disappointing and they are probably going to shuffle the squad a bit.

Bangladesh’s batting was exposed by a quality English bowling lineup. West Indies doesn’t have the same quality but they can take the pace off the ball and the batters who are struggling for timing will find it difficult. One major issue in the two Super 12s games has been the struggles of Shakib who has made 10 & 4 in two games. Liton Das has been struggling since the first round and has made it past 20 only once, will he see Soumya Sarkar replacing him for this bout?

Mushfiqur Rahim has done well in the last two games while Mahmudullah didn’t deliver against England but has been “decent” overall. Among the rest of the batters, Nasum Ahmed gave a 9-ball 19 runs performance but can you expect your lower-order to win games? Overall, the team has lived up to the historical inconsistencies in major tournaments and it is not a matter of talent or hard work, the semblance as a unit is missing in key moments.

Will the bowlers please stand up?

The bowling has also been exposed against top-tiered talents. First Sri Lanka took them to task after chasing 172 runs and then England finished 125 runs business with six overs to go. Mustafizur Rahman has not taken a wicket in the last three matches, Nasum Ahmad has shown an ability to take wickets but he has spent a ton of runs. Shakib has been the pick of the bowlers but even he failed to make a dent in the last game. Mehedi Hasan was also taken to task by England while Shoriful Islam also failed to make much of an impression. The boundaries are short here and the West Indies power-hitting can take the game away with the fielding also not doing any favors for Bangladesh so far.

Peak performers for Bangladesh in the Super 12s are given below:

On paper, West Indies presents an incredibly loaded batting line-up. The names of Chris Gayle, Kieron Pollard, Andre Russell, Dwayne Bravo, Evin Lewis, Shimron Hetmyer, and Lendl Simmons are counted among some of the most destructive short-format batters. There is no doubt that there are a bunch of players in this team who can fly the ball out of the park. Then what has happened? The players have not been able to find the timing and have struggled both against spin and pace. Only one batter in two games has shown an ability to score big and that is Evin Lewis, who held the batting together in the last game by making 56 runs off 35 balls. Against South Africa, Lendl Simmons had perhaps the worst T20I game of his life, only managing 16 runs off 35 balls, will he be dropped? Gayle has not made any impression in the last two games and has looked lazy while playing some shots and overall, the team has both lack intent and concentration.

The bowling has kept some order

The bowling has done a decent job so far and especially Akeal Hossein. Akeal has been an impact player in the Powerplay and has taken three wickets in the last two matches, bowling mostly with only two fielders on the boundary line. Ravi Rampaul has kept it tight and he has shown that he may not leak many runs. Against South Africa, Dwayne Bravo also bowled well with his slower deliveries but he has not got much to defend for two games in a row. In the game against Saffas, Hayden Walsh conceded 26 runs in three overs and was taken apart by Markram. Jason Holder who just got added to the main squad may get a game considering his stellar IPL performances. Overall, the bowling has been way better than the batting but still has only taken 6 wickets in two games although the blame largely lies upon small totals.

Peak performers for West Indies in the Super 12s are given below:

Pitch: The Sharjah pitch can be a bit tricky when the pace is taken off the ball as shown by Haris Rauf. It has seen scores like 190, 172 but the quality batting of New Zealand and Pakistan struggled in the last game to get close to 140. This ground has a short boundary to the batter’s leg side so there can be a lot of sixes if things click for a team’s batting, which can mean that West Indies power-hitting can notch a bunch of them while Bangladesh’s hitters like Rahim can get into play. You can expect 150-170 but it depends what kind of pitch is laid on the day.

Head-to-Head: It is a close head-to-head record between Bangladesh and West Indies. The Windies have come on top six out of 11 games so Bangladesh will look to tie the overall affair in this contest. While batting first, both teams have taken three games each and West Indies has won three compared to Bangladesh’s two in chases.

We are backing Bangladesh due to more in-form batters and an all-rounder like Shakib Al Hasan. West Indies can bring out their arsenal of power-hitting but things are not just clicking right now. This is a tough one to predict because of the way both teams are playing right now. In terms of sixes, the short-side of the boundary can come into play with a plethora of power-packed batters so keep that in mind while betting for Under and Over for Sixes.