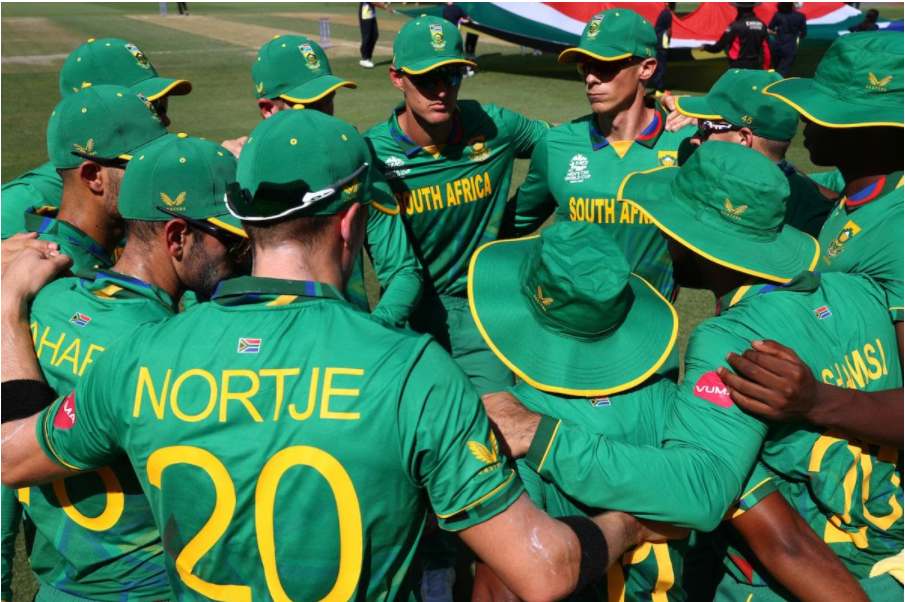 To add to the T20 World Cup canon, South Africa and Sri Lanka will meet in a Group 1 fixture. South Africa beat West Indies in a convincing during the team’s last game while Sri Lanka lost against the Australians as its batting in the middle overs and the bowling also fell apart. This game holds a lot of importance for the Semi-Finals make-up and becomes a must-win for both squads.

South Africa: Nortje is on fire

Anrich Nortje has been a special fast bowler in this tournament, not caring what kind of wicket he is bowling on. He has taken 3 wickets in 2 matches and his economy is well under 5. His fast-bowling partner Kagiso Rabada has also been menacing and South Africans seamers have been highly effective. How can the Sri Lanka batting counter this pace attack which has been well-supported by Dwaine Pretorius so far?

The spin bowling duo of Keshav Maharaj and Tabraiz Shamsi presents a challenge too, especially on a Sharjah pitch that can show some tendency towards gripping. Maharaj has been the better of the two bowlers so far as Shamsi got gunned down by a dangerous Evin Lewis in the last game. Sri Lanka will have to face different bowling styles and variations against this loaded bowling, which has bowled tightly.

Aiden Markram has shown the way in batting

Aiden Markram has now lodged back-to-back high scores for South Africa including a 26-ball fifty against West Indies. With Quinton de Kock out of the picture in the last game, he came at number four and didn’t care for either the slower deliveries of Windies seamer and also took on spinner Hayden Walsh. This is an ominous sign for Sri Lanka whose bowlers have taken two hammerings in a row. Quinton de Kock will most likely return for this game and when he does, he can’t be taken lightly, he is due an innings and surely, you can back on de Kock to deliver sooner than later.

What makes the South African batting line-up intriguing is the presence of someone like Rassie van der Dussen, someone who can hold an end and allow the batter to play freely. He has been an effective option for South Africa in the past and will be in play again. Temba Bavuma is struggling for form and fell to a silly run-out in the last game but you can count on him to stabilize the batting. Down the order, David Miller is the dream finisher who can go hard at the baller while Heinrich Klassen has the license to hit it out even if it means that he falls early, he is the cameo performer in the team, usually delving into 10-ball 20 runs innings type of efforts. With Reeza making a stellar 39 runs in the last game, will he get replaced by de Kock? Would be tough on him if it happens.

Overall, the in-form players for South Africa can be dubbed as first and foremost Anrich Nortje in bowling, Aiden Markram in batting. Keshav Maharaj and Kagiso Rabada in terms of bowling too. Meanwhile, Rassie van der Dussen also showed some lovely touch in the last game while Quinton de Kock and Temba Bavuma have been struggling for form a bit. Remember, the team’s spinner Tabraiz Shamsi is among the top T20 bowlers and you can bank on him to come back from a tough game.

Peak performers for South Africa in the Super 12s are given below:

Sri Lanka: The bowling has struggled in the Super 12s

Chameera is out of rhythm

It can be one of the two or both, in the first round, either the Sri Lanka bowling faced comparatively unstable and inexperienced batting lineups or the pitches have been revamped for the Super 12s round. The team scythed through every batting in the previous but against top sides, they have first conceded 171, and then the Australians pounded them by chasing 155 in 17 overs, both instances have shown runs per over more than 8.5.

Chameera has looked in no control, conceding a lot of runs and the batters have read him like an open book. Meanwhile, Kumara also got battered around the park against Austalia so the pace bowling looked out of sync in previous games. However, the spinners have fared better, the return of Maheesh Theekshana has bolstered the bowling while Hasranga has continued to be effective with his wrong ‘uns and tossed up bowling, especially against charging Australian batters. Shanaka bowled just one over in the last game but took a wicket while conceding six runs, can he bowl more? What will be the ploy after two beatings the ballers have taken?

Asalanka and Rajapaksa mainstays of the batting

Charith Asalanka and Bhanuka Rajapaksa in the middle-order have been the ones responsible for most of the momentum. Both of them can score quickly and go the distance too. Pathum Nissanka and Kusal Perera have not given a substantial start so far and the middle-order has been asked to do the heavy lifting. Perera showed some decent signs with a 35-run effort against Australia but Avishka is also struggling in terms of form. Shanaka has shown recently that he can’t bolster the scoring rate by much and has not found his timing for a long time. Against the tough bowling of Saffas, can this order show more fight?

Overall, it is clear that the two most in-form batters for the team are Rajapaksa and Asalanka. Meanwhile, among the bowlers, Theekshana and Hasarange have looked the most threatening. Can the other bowlers show more bite against South Africans?

Super 12s peak performers for Sri Lanka are given below:

Pitch: The Sharjah pitch can be a little tricky especially when you bring in spinners like Maharaj, Theekshana, Hasaranga, and Shamsi in play. However, the South African pace batteries Nortje and Rabada have shown to be effective on any type of pitch. The South African batting line has more experience but Sri Lanka has fared well too. In the last game, the Lankans lost their way against Zampa, a spinner, so they must be careful around Maharaj and Shamsi. The pitch has shown scores as high as 190 and as low as in 130s(including a 60 all out by Scotland) during the Super 12s.

Head-to-head: Saffas have won 11 out of 16 games against Sri Lanka including a series win on the Lankans’ home pitch. Most of the wins recently have been comprehensive for South Africa so the Sri Lankans will look to bounce back at the big stage.

We back the South Africans to come through especially due to their recent bowling performances. The batting line-up also looks more sturdy and dense compared to Sri Lanka. These are the batters and bowlers you must keep in mind before picking player based bet: