West Indies vs. England: Can England Bounce Back and Level the Series? 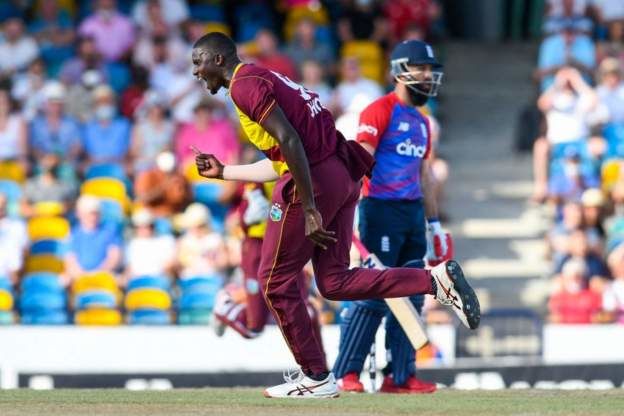 After the high-scoring 3rd T20 international, both teams are geared up to win the series. After gaining the momentum and form from the 2nd T20 international, West Indies are in the driving seat and likely the favorites to win the series. In the 3rd T20, West Indian batters took England bowlers to the cleaner setting a monstrous target of 225 runs in the 20 overs. English batters were also up to the task and fought well to track down the massive score on the board. However, West Indians kept their nerves calm and bowled on consistent lines and lengths to stop the flow of runs.

England: Searching for a Series Leveler

While chasing 225 runs in the 3rd T20, only a few England Batsmen were able to contribute to the team’s total. However, Tom Banton’s quick fiery 73 of just 39 runs ball set a decent pace for upcoming England batsmen. Along with him, Phil Salt played an unexpected cameo of 57 runs of 24 balls, with a strike rate of 200. In the previous game, Adil Rashid bowled extremely well on a batting-friendly wicket and picked up 1 for 25 in his 4 overs. Reece Topley also bowled with a decent economy of 7.25, managing to pick a scalp.

In the upcoming 4th T20 international, Eoin Morgan and his men would be looking to improve their overall gameplay and play according to their strengths. England is expected to make one or two possible changes to strengthen their bowling department and give a chance to youngsters on their side. Talking about their batting, England’s top order is moving in the right direction; now it’s time for the middle order to build some partnerships and bat deep with the bowling all rounders lower down the order.

After gaining momentum from the 2nd T20, West Indies are unstoppable. Rowan Powell and Nicholas Poran put up a great show with the bat, taking the West Indies score to 224/5. Blistering knock of 107 runs off 53 balls from Powell made West Indies the favorites in the first half of the game. West Indian bowlers also chipped in timely, taking crucial wickets and containing the flow of runs during the lateral part of the game.

In Bowling, Keiron Pollard came to the party, picking 2 crucial scalps in his 4 overs. Romario Shepherd was very expensive the other day but was able to pick 3 wickets against the run of play. Going into the 4th T20, West Indies are the favorites of winning the match and getting the series 3-1.

Going in the 4th T20, England would be searching for the right combination in their bowling performances. The England team had many positives to carry back in their dressing room, keeping their hopes alive to come back more strongly. However, West Indies are the favorites of winning the match and getting the series 3-1.