Content
To top
1.
FaZe: On the Way to the Intel Grand Slam
2.
Complexity: the Most Unexpected Guests in the Playoffs
3.
Expert Betting Tips
Users' Choice
1632 200 USD

FaZe vs Complexity Prediction: the End-All for the U.S. Organization 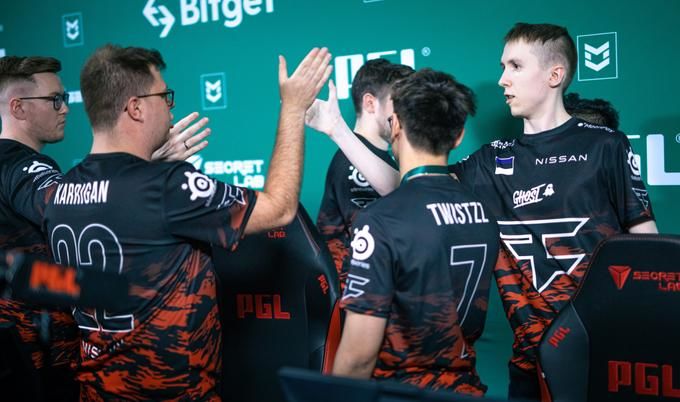 The group stage is behind and all playoff participants have already been determined. Many of the teams that made the playoffs were favorites and took their place with confidence. And others had to give themselves and the fans a sensation to end up here. The Complexity team belongs to the second type. We'll find out soon enough if they are strong enough to pull off another upset.

FaZe: On the Way to the Intel Grand Slam

karrigan and his team had an excellent finish last season. Since the signing of ropz they have won many top-level tournaments and have legitimately taken the first line of the world ranking. In the new season, FaZe have already played well together and had a pretty good tier-1 tournament.

In this tournament, FaZe is the favorite in absolutely every encounter. In most group stage matches, the guys dominated their opponents. They played at the highest level, being motivated to win the next cup. But the game against G2 showed that even the best could lose. In that match, from their confident play was no trace left. Either G2's preparation was genuinely excellent, or FaZe themselves relaxed because of their premature advance into the tournament's next stage. However, the playoffs are a completely different story; any mistake will mean failure and withdrawal. karrigan understands this like no one else, especially since the first Intel Grand Slam title is at stake for both the organization and the legendary captain. Their first opponent in the playoffs does not look like a serious threat, although, according to the standings, both teams are in the same position. FaZe outclasses the opponent both in experience and in the individual level of each player that they should quickly run over their opponents because now, there is no margin for error at thistournament stage.

The last change in the lineup was the arrival of Robin ropz Kool.

The best rating according to hltv - 1 in the world. Currently in 1st place.

Complexity: the Most Unexpected Guests in the Playoffs

The new lineup of the Complexity team did not bring quick, positive results. Even in their region, they could not stick in the top ranks, let alone in the European division. Nevertheless, there is a place for them in almost every event due to the partnership agreements. Today the organization is already slowly moving away from the American roster. For the new season, the team was strengthened by a European sniper - hallzerk, who is stronger than junior. They played well in the North American qualifiers for the RMR, taking first place. They also managed to play one top event among the best teams. Complexity only managed to win one match, which ultimately didn't decide anything. Nevertheless, we can see the potential in the players.

In this tournament, Complexity, contrary to all predictions and expectations, came out of the toughest group showing a very confident playing and making some sensations. Complexity was the most unexpected guest in the playoffs among all participants. Unfortunately, their beautiful history in this tournament comes to an end. If their first opponent had been any other team, they could have looked for chances and even believed in a sensation. But the Americans are helpless against FaZe, who are going for one of the most prestigious titles in the world.

The last replacement in the lineup was Håkon hallzerk Fjærli in the sniper role.