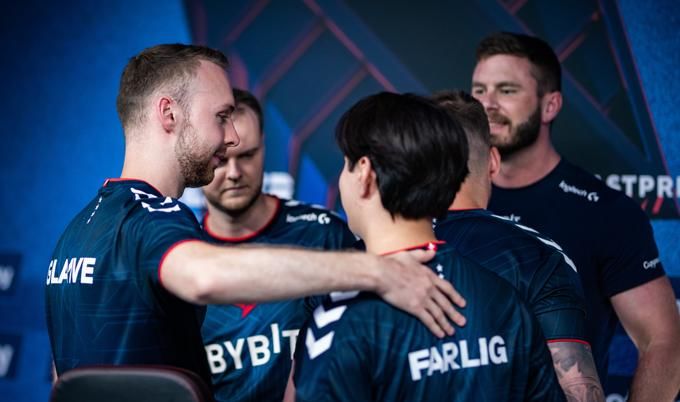 ESL Pro League Season 16 is a historic event for the global community, and it's almost impossible to overestimate its importance. The championship title is much more important than a good prize pool of $823,000 by CS:GO standards. The tournament is unique in its system, namely in its duration. During the month, the participating teams will defend the banners of their organization. The tournament involves 24 teams, divided into 4 groups of 6 teams. The team ranked first in the group will obtain a slot in the quarterfinals. Second and third place teams will go to the first round of the playoffs, and the rest will go home.

So Group C has come to an end and we are to see the last matches. Team Heroic have already taken their place in the playoffs, and this match means nothing to them. While Astralis, having lost, may drop out of the tournament, but this is not certain because the result of the parallel match is also an important factor in this matter.

The Danish players of Heroic are very experienced and strong individually. They have been playing together for a long time and have managed to build their team play and find their own unique style, which is hard to play against. The team has long established itself as a stable representative of the tier 1 level. However, at the end of the last playing season, Heroic made a non-binding substitution, and things went downhill. It takes a long time to fully integrate a new player into the team's complex game system. Nevertheless, there was a full month to prepare for the start of the new season.

Heroic got off to a losing start in this tournament. A number of mistakes made greatly spoiled the first impression of the team. However, their next matches showed that these were only isolated cases, and the team began to show a strong, confident game. So far, the opponents (except for the first match) did not pose any threat to the heroic guys. They played with ENCE, as well as with Complexity. In general, the Danes from Heroic had a very good group, winning all of their principle matches. And with the last victory over HEET, the guys earned themselves a slot in the playoffs. The result of this match will only affect the seeding, so the guys can play without pressure and with the right to make a mistake.

The latest change in the lineup was the arrival of Jakob "jabbi" Nygaard.

Just like teamwork, the individual form of players changes from match to match. Absolutely every single player can completely fail in a match, or he can be the deciding factor in a victory. And it is not clear on what factor it depends. The team most certainly deserves the title of the most unstable and undisciplined. The reason for that is the players' approach to the game, which can hardly be called professional. They only play seriously against teams they consider strong, but against teams weaker than them, they don't even try, and often they lose.

In this tournament, Astralis played very poorly against the underdogs. They were punished over and over again for their attitude and underestimation. Thus, games that looked like free group points for Astralis ended in their defeat. But in a game against the group favorites, Astralis change their approach and confidently take control of the game. Neither MOUZ nor ENCE took a map against the Astralis. Thanks to such confident victories, Astralis beat the teams they lost to and took third place in the group. But their participation in the playoffs could still be disputed. On the positive side for Astralis, the sharpshooter has finally started to produce a steady game. "Farlig" has returned to the aggressive style he played in his previous teams and has started to bring incredible impact to his team. We can also mention "blameF" who is the last bastion of stability in the team. To strengthen their position and their status as favorites killers, the Danish five need a win today. Moreover, if they lose, they risk missing the playoffs.

The latest change in the lineup was the arrival of Martin «trace» Heldt as the coach.

We suggest betting on Astralis to win for 2.00 at betking.