Atletico Mineiro vs Fortaleza: Atletico-MG further strengthens to break the drought and seek the title 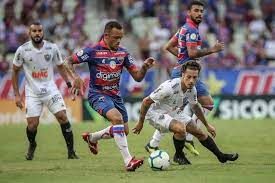 One of the matches of the opening round of the Brazilian A-Series will be the match in which Atletico Mineiro will face Fortaleza. The Roosters, the unconditional favorites of the pair, Atletico Mineiro is in great shape, the team from Belo Horizonte almost does not miss, well, do not forget that in the off-season the future hosts strengthened the team.

Atletico Mineiro: A great result in the Libertadores Cup

Atletico Mineiro looked strong in the group stage of the Libertadores Cup. The Roosters scored 16 points in six games, with only one draw and zero defeats, and a goal difference of 15-3. The closest competitor, Cerro Porteño, lost six points to the Roosters, and in the last round Atletico Mineiro defeated Deportivo La Guaira 4-0 on its field, although Atletico Mineiro didn't really need the victory in that game. Also note that Atletico Mineiro has not lost since April 11 and the match against Cruzeiro in the state championship. Since then, Atletico Mineiro has four wins and two draws at the Mineirão.

Fortaleza: Between matches against Ceara

Fortaleza will play a match against Atletico Mineiro in between games against Ceará. On May 23, Fortaleza played a 0-0 draw against Ceará in the state championship, and on June 3, the Tricolores will play their rival in the National Cup. Fortaleza also has something to boast, the Tricolor have not lost since April 25 and the match against Bahia in a tournament called the Copa de Nordeste. Since then, the would-be visitors have played eight games in the state championship, five of which they have won with three draws. On the road, Fortaleza lost in A Series - 2020 to Fluminense with a score of 0-2. And after that, seven wins and two draws.

Atletico Mineiro this season expects to fight Flamengo and Palmeiras, i.e. to fight for the A-Series title. It's not for nothing that the Cocks purchased Hulk. In this regard, Atletico Mineiro will do everything possible to start the league with a victory, especially since their opponents are not the top Fortaleza. And let's not forget that Atletico Mineiro as well as Fortaleza have a complete order in defense, the hosts and guests have zero conceded goals in the last 4 games. We have the following table of bets for this match: Draw for 5.50, Fortaleza - win to nil for 5.50, Atletico Mineiro to win for 1.30.

Independiente vs Santos: betting on a 1-1 draw

Brazil vs Germany: Group D favourites to share points in a head-to-head clash

Honduras vs Romania: La Bicolor will be closer to victory

Argentina vs Australia: The White and Sky Blues will leave no chance of success

Ivory Coast vs Saudi Arabia: Elephants to prove themselves in attack and pick up three points

Egypt vs Spain: La Roja to pick up a big win in the opening match of the tournament

Velez Sarsfield vs Racing: bet on a draw

Santos vs Independiente: Bet on the Brazilians

Independiente del Valle vs Bragantino: the Red Bulls are underestimated?

EURO 2020 Betting Tips & Odds: The Belgians will reach the trophy

EURO 2020 Prediction: betting on non-obvious outcomes in Group F - The group of death

Fluminense vs Athletico Paranaense: Will the Tricolor break an upsetting streak?

Atlético-GO vs Bragantino: Bet on the visitors

Mexico vs Honduras: Irving Lozano and his team will outplay the Hondurans