Athletico Paranaense vs Flamengo: Furacão not to lose to Mengão again 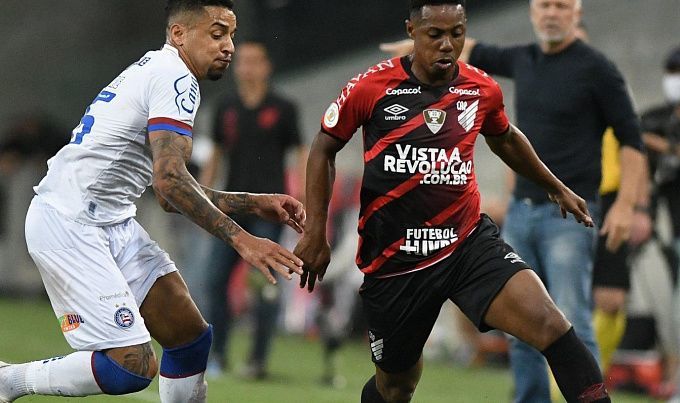 Round 3 of the Brazilian Serie A will start with the match between Athletico Paranaense and Flamengo, with the team from Rio quoted as the favorite, even despite the field factor. It's not easy to play and win in Curitiba and in general Athletico Paranaense is an uncomfortable opponent for Flamengo.

The beginning of April turned out to be eventful for Atletico Paranaense. The Red and Black played five official matches in three different tournaments during this period. In the Copa Libertadores, Athletico Paranaense played an away draw against Caracas and beat The Strongest 1-0. The future hosts knocked the club Tocantinopolis out of the Copa do Brasil, beating them 2-5, and lost 0-4 to São Paulo in the national championship, as well as losing narrowly to Atlético Mineiro. As a result, before the start of round 3 the Red and Black have 0 points, but it is worth paying attention to a very tough schedule for this club at the beginning of the season in Serie A.

The club from Rio de Janeiro has a 6-match unbeaten streak while managing to lose the state championship to Fluminense in this stretch. In Copa Libertadores, the Brazilian champion has two wins over Sporting Cristal and Talleres Cordoba, and in the national championship, Flamengo has already played three matches, scoring five points: a 3-1 home victory over São Paulo and two draws against Atletico Go and Palmeiras. As a result, Flamengo enters round 3 of the Brazilian Serie A with five points & third position in the standings, behind Corinthians and Atletico Mineiro with 100%.

Athletico Paranaense and Flamengo have played each other 55 times in six tournaments. In addition to Serie A, the Red and Black teams have crossed paths in Copa do Brasil, Copa Libertadores, Copa Sudamericana, Supercopa and the Primeira Liga. In general, neither team has an advantage: 21 wins and 13 draws, 76-72 goal difference in favor of the team from Curitiba. The opponents have crossed paths 41 times in Serie A: +18=9-14, 62-53 in favor of Athletico Paranaense. Atletico have 27 head-to-head encounters, 14 won by the home team compared to 10 draws and three wins by Flamengo on goal difference of 47-25. By the way, last season saw Athletico Paranaense knock Flamengo out of the national cup and the Serie A match in Rio ended with a confident 3-0 win for Flamengo and a 2-2 draw in Curitiba.

Athletico Paranaense had a very difficult start to the season in Serie A: matches against São Paulo on the road and the national champion Athletico Mineiro at home. Against Galo, the future hosts played at a good level, and had chances for a draw, but it was the higher individual skill of the players of the strongest Brazilian team that played a crucial role. Zero points motivate the hosts for the upcoming match as much as possible. Flamengo is a strong and dangerous opponent, but historically it is difficult for Fla to play matches in Curitiba. We believe the motivated home team will not lose today. 1X for 1.80at Bet365.

Recall that Athletico Paranaense has 52% of wins over Flamengo at home, a very revealing result, and in Serie A Fla has beaten the Athletes only once in Curitiba. Taking into consideration these statistics and the line posted on the match, we can take a risk by betting on a clean victory of the home team for 3.84 at 1xbet.

As for the score, we believe that the upcoming meeting will not be very rich in goals, and the fate of the match will be decided only by one goal. Correct Score 1-0 for 10.0 at the line of 22bet.