Botafogo vs Cuiabá Prediction: Botafogo has Decent Odds of Winning 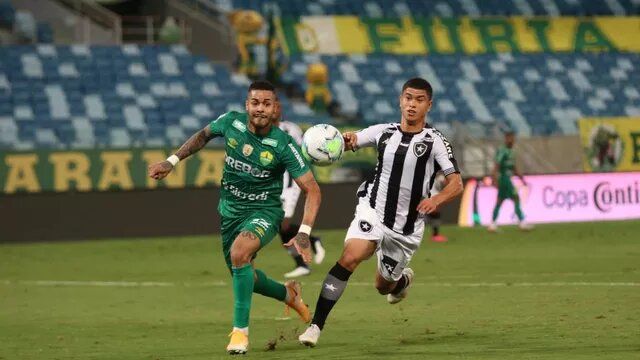 In the upcoming fixture of the Brazil Serie A, Round 35, Botafogo will take on Cuiaba at the Estádio Nilton Santos in Rio de Janeiro. According to the win predictor, Botafogo stands 51 percent chances for winning, due to its consistency and 10th spot in the points table. So far Botafogo has won 13 games and secured 47 points from 3 games. On the other hand, Cuiaba stands 16th with 8 wins and 34 points in the contest so far. Though Botafogo is yet to defeat Cuiabá, the home side seems reasonably the favorite for winning.

Botafogo - Coming off a Win Against Red Bull Bragantino (WDLWW)

Going in the game, Botafogo is coming off a thrilling win against Red Bull Bragantino (2-1), in which Gabriel and Tche Tche scored goals in the 18th and 71st minute of play. Botafogo is likely to carry the same 4-2-3-1 lineup, and align itself to win. In the previous game, Botafogo had a total of 18 shots, with 3 on target and an accurate passing percentage of 80%. For tomorrow’s game, Renzo Saravia, Lucas Fernandes, Kayque, and Carlinho will be unable to due to injuries.

Cuiaba - Managed to Secure a Win Against Avai (WLDLL)

Going in the game, Cuiaba is coming off a much needed win against Avai FC (1-0), in which Pepe scored the only goal of the game in the 90th minute of play. Cuiaba is likely to continue with the 4-1-4-1 formation and back Marcao and Pepe to score. With an accurate passing percentage of 48%, Cuiaba will look to move ahead of the game and give the hosts a tough time in the middle. With a goal scoring average of 0.8 goals per game, Cuiaba might manage to secure a goal here or there.