Coritiba vs Palmeiras Prediction: The White and Green in Curitiba will traditionally have a tough time 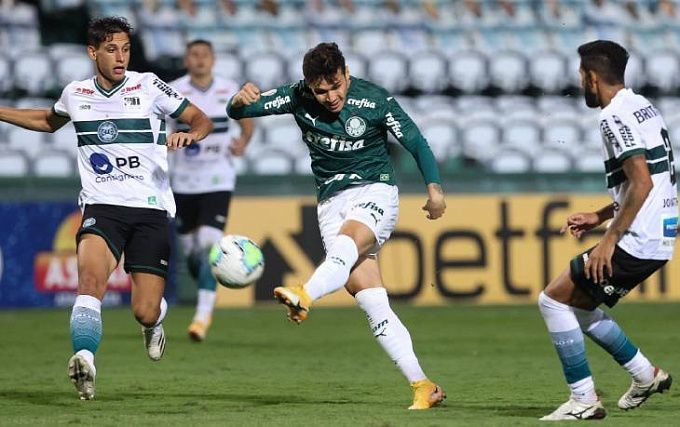 The reigning winner of the Libertadores Cup and leader of Brazil's current championship, Palmeiras, will play their next game away against Coritiba. Will the green and white win? We have a few betting options to choose from.

The fact is that Curitiba, where the team plays their home matches, is located on a high plateau. Consequently, when playing on home soil, Coritiba has an additional advantage over visiting opponents. Like Bolivia, who have won two Copa America's in similar circumstances at home.

This season, Curitiba has played five matches in the Brazilian league and hasn't lost a single one (4 wins and a draw). At the same time, the team has lost 3 of its five away matches and has not won a single one.

In the previous round, the Greens and Whites thrashed Botafogo 4:0 at home, their fifth win in the new national championship. Palmeiras has suffered just one defeat in the last ten rounds. With 19 points and a goal difference of 17:5, Abel Ferreira's side tops the table.

Portugal's Abel Ferreira is in his third season leading Palmeiras. His first two ended in triumph. The Greens have won two consecutive Libertadores Cups under his guidance. Palmeiras finished third last season and seventh the year before.

Abel Ferreira's side has been excellent in defense as Palmeiras have only allowed their opponents to hit five times in the first ten rounds. The Whites are also good offensively, but it is far from certain that Palmeiras will be able to display their best-attacking qualities in unfriendly Curitiba. The hosts are also unlikely to be able to penetrate the Greens' defense more than once. So we suggest betting on a total under.

30 Jun 2022 15:12 Match Result: Paula Badosa vs Irina Bara: Easy peasy for Paula
This website uses cookies
This provides customers with a personalized experience and increases the efficiency of visiting the site, allowing us to provide the most efficient service. By using the website and accepting the terms of the policy, you consent to the use of cookies in accordance with the terms of this policy.
Settings
Feed
Customize