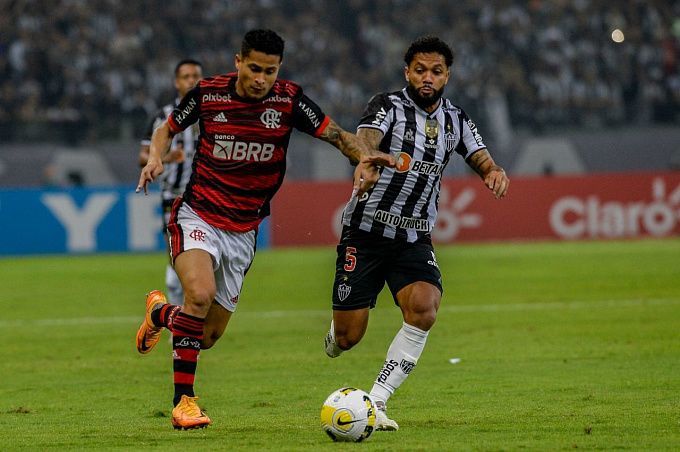 Prediction for the Brazil Serie A Flamengo vs América Mineiro match, which will take place on June 26. The Red and Black have nowhere to retreat, the start of the season has failed, and the Rio club needs only a win on Sunday to improve their tournament placing. Who will turn out to be stronger? Check the team conditions! Several betting options are available.

After the defeat against Bragantino, Flamengo executives fired the head coach. Since June 10, the team has been managed by 60-year-old Dorival Júnior, who once won the Brazilian Cup with Santos. Yet, the change has not led to anything positive. Over the past four matches the team won only once, at home over Cuiaba with a score of 2:0. However, Mengao's schedule was extremely difficult: the away matches against Inter and twice against Atletico Mineiro. By the way, Flamengo's Cup match against Galo was quite good, although they lost 1:2. There is hope that Flamengo will flourish in the near future.

Before the 14th round Flamengo is only one point ahead of the relegation zone Goias. If they fail they will drop into the bottom four. In other words, Flamengo has double motivation for the upcoming meeting. Their home statistics are 13th in the division, +3=1-2, 7:4 goal difference. After the defeat by Atletico MG Flamengo might be eliminated from the Cup of Brazil. So it is extremely important for Mengao to claim some victories in the next few rounds to get closer to the Cup of Libertadores. The fight for the title this season is out of the question.

America is in a slump. After a home win over Cuiabá, Mineiro has played four matches and gained only one point, losing to Ceará, São Paulo and Fortaleza and not scoring a single goal. Despite the terrible statistics in June, America somehow miraculously stays out of the relegation zone, ahead of Goias only by one point. America's away stats are 17th in the division, +1=1-5, 3:9 goal difference.

Flamengo is not laughing anymore, one more setback and the recent champion of Brazil and the strongest team in South America is at risk of falling into the relegation zone. America is a very convenient opponent for Flamengo, taking into account the matches played at the Maracana. Who else if not America, which has got only one point in the last 4 rounds, Flamengo should beat at home. We believe that Flamengo will shine on Sunday, we bet on a confident victory for the Red and Blacks.