Internacional vs América Mineiro Prediction: Bet on a confident win for the favorite

Campeonato Brasileiro Serie A. Round 16 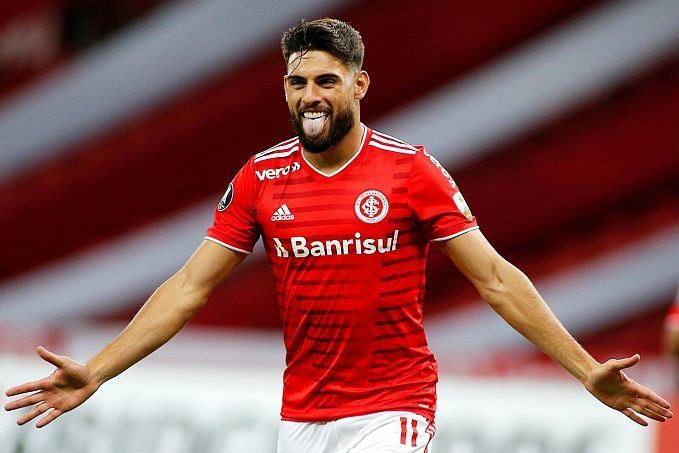 Round 16 of the Brazilian Serie A will end with a match between Internacional and América Mineiro. The future hosts are quoted as notable favorites, while it should be noted that América has a two-match winning streak.

Internacional played a great game in the midweek, beating Colo-Colo in the Copa Sudamericana last eight 4-1. It must be recalled that a week ago the Reds lost away to the Chileans with a score of 0-2 and in order to play in the quarterfinals, Colorado needed a victory of three goals or more, which was achieved. As for Inter, Alan Patrick, Edenilson, Alemão and Pedro Henrique were among the scorers. A strong and very powerful victory which makes the Reds the favorites to win Copa Sudamericana. Now they can concentrate on the Brazilian championship, where Inter are doing very well. Still, it could be better. Currently, the Reds are sixth in the standings with 25 points, and with a win they could even move up to third place, closing the gap to the leader by two points. The home stats for Colorado are 14th in the division, with 12 points on a 13-8, +3=3-1 goal difference.

Unlike Inter, América Mineiro has long been focused on domestic tournaments. The would-be visitors played two home games in July and won both. First, América proved stronger than Botafogo in Copa do Brasil, 3-0. And after three days, América narrowly defeated Goias already in the national championship. Thanks to this victory the visitors left the relegation zone, climbing to 15th place in the standings. However, the gap from Ceara, the team from the bottom four only on goal difference. América's away stats are one of the worst in the division, 17th to be exact, with only four points scored in eight games, +1=1-6, 3-12 goal difference.

The teams have played each other 17 times: +10=4-3, 30-16 goal difference in favor of Colorado. In addition to Serie A, the opponents have crossed paths in Copa so Brasil and Serie B. There are 11 head-to-head encounters in the Brazilian championship, Inter winning seven matches, two draws and two victories for America. On Inter's field the teams have faced off seven times: +6=0-1, 17-7 in favor of the hosts. In 2021, the opponents crossed paths twice: a 1-1 draw on América's field and a 3-1 win for the Reds at their home arena.

The only downside of betting on Inter in the upcoming game is that the Reds played a Sudamericana match in midweek, which turned out to be quite emotional. However, five days passed since that time, which is not enough to properly recover, especially since there were no flights and trips, both matches for the Reds are home ones. In the reporting round, Inter's direct rivals lost points: Palmeiras, Atlético Mineiro and São Paulo, which, of course, lifted the team's spirit. Keep in mind that by beating América, Inter will definitely move up to 4th place, and perhaps even to third place, overtaking Atlético Mineiro. And it is impossible to ignore the fact that Inter have excellent home stats against América. For the final match of the Brasileirão round 16, we offer the following betting options: