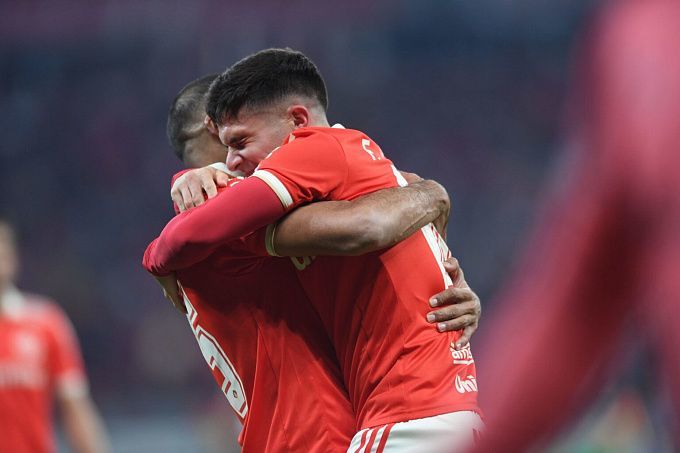 Round 14 of the Brazilian football championship will begin with the match between Internacional and Coritiba. The future hosts are quoted as clear favorites. Though last round the Red lost at home. That said, Coritiba hasn't been very impressive recently either: the Greens have a three-match losing streak.

As we wrote above, Inter lost on the home field in the last matchday. The opponent was Botafogo, the score was 3-2 in favor of the lonely Star. Frankly, it was a surprising match, because Inter led 2-0 with one more player. However, Botafogo players somehow managed not only to win back but also snatched the victory in the 11th added minute, a goal scored by Hugo. All in all, it was a disappointing match for Inter, who dropped from third place to fifth. Should they beat Coritiba, Colorado will regain third place, perhaps temporarily. But the Red's home statistics are only the 14th in the division, while at home they have only two wins in six games with a goal difference of 10-8.

Coritiba has only scored two points in the last five games: draws with Ceará and São Paulo and losses to Palmeiras, Bragantino and Atletico Paranaense. Before the start of round 14, Coritiba is in 15th position, with 15 points, just one point ahead of Goias, in the relegation zone. On the other hand, in case of victory on Saturday, Coritiba will immediately climb into the top ten of the Brazilian championship. Such is the density in the Brasileiro standings. Away Coritiba has the worst statistics in the division, only two draws in six games and four losses, with a goal difference of 7-13.

Inter and Coritiba have played each other 32 times, twelve won by the Red, with 11 draws and 9 victories for Coritiba, goal difference of 38-30. The opponents have played each other in three tournaments: in addition to Serie A, they've faced off in Copa do Brasil and Primeira Liga. Inter and Cortiba have played 29 matches in Serie A, 11 wins for the Red, 10 draws, and eight wins by Cortiba, with a goal difference of 35-28. The Red have 53% of victories at home, quantitatively 9 with six draws and two victories for Coritiba. Colorado have won eight of their 15 home matches in Serie A.

After such a setback as in the match against Botafogo and the loss of points, which worsened the tournament position of the Red, we do not doubt the maximum motivation of Colorado for the upcoming encounter with one of the outsiders. Also note that Coritiba has a very weak performance on the road, which is another plus for the motivated home team. At the same time, Coritiba also has a three-match losing streak, which shows that the current tone of the Greens is not the best. Here are the betting options for this game: