Palmeiras vs Gremio: Another victory for Palmeiras! 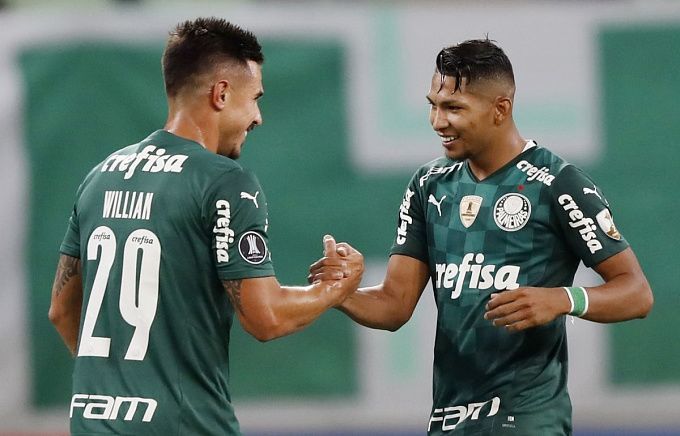 Palmeiras from Sao Paulo will face Gremio in the 10th round of the Brazilian Serie A. Both teams are ambitious and both want to fight for the title, but only Palmeiras is doing well. Whereas, Gremio remains in the relegation zone, a hopeless situation for the Inmortales.

Before the start of the 10th round, Palmeiras is currently in the third position, with 19 points and two points behind Bragantino, the leader of the championship. It could very well happen that Athletico Paranaense, which will play its match against Santos a day earlier, will take the lead again and beat the Bulls. However, it does not really matter, anyway, they need a victory in the upcoming game. It should be noted that Palmeiras has a three-match winning streak. After the defeat, just from Bragantino, they achieved a home victory over Bayeux, on the road the team from Sao Paulo was stronger than Inter and Sport. Overall, Palmeiras' home stats are third in the division, +3=1-0, 9-5 goal difference. Note that only Fortaleza has scored more than Palmeiras in home games.

Renato Gaucho is gone, while the acting head coach is Thiago Gomes, a 37-year-old specialist. We'll see, but to be honest, we don't have much faith in this coach, especially since Palmeiras is gaining momentum, it is important for the Greens now, before the Libertadores Cup playoffs start, to keep the momentum gained, to win consistently, to keep up with the leaders. In turn, it is important for Gremio to get out of the psychological us, but again, it is not certain that it will work out with the current acting coach. The winless streak of Inmortales has lasted seven games since June 2. In the championship of Brazil - 2021 Gremio has not won once, however, pay attention to the fact that the team from Porto Alegre has played only seven games, that is two less than Chapecoense and Sao Paulo, are in the same place in the standings.

Given Gremio's difficulties, we have little doubt that Palmeiras will win the game on July 8. The Greens will do everything they can to maintain their position in the top 3, and in order to do that they need to beat Gremio. In turn, the Inmortales are not just on the decline, but in a real crisis. We offer the following odds for this game: W1 for 1.85, X for 3.60, Both Teams To Score - Yes for 1.85.