Palmeiras vs Internacional Prediction: Verdão to strengthen their lead

Campeonato Brasileiro Serie A. Round 19 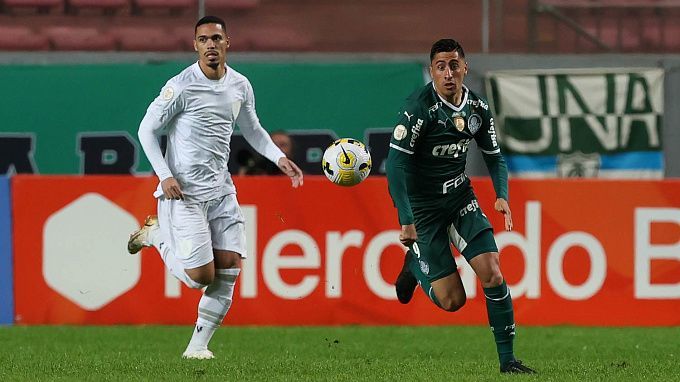 The centepriect of the Brazilian Serie A round 19 will take place in São Paulo, where the strongest team in South America last season, Palmeiras, will face Porto Alegre's Internacional. Both teams are located in the top 6, you could say, direct competitors. So it should be fun.

Palmeiras has a five-match unbeaten streak, but despite those statistics, the Verdão are out of Copa do Brasil, losing in a 2-match clash to São Paulo. In the championship, the Greens played three matches in this period: a 0-0 draw with Fortaleza on the road, victories over Cuiaba and América with the same score of 1-0. Such results allowed Verdão to maintain their lead in the division, the gap from the nearest pursuer, Corinthians, amounting to four points. Palmeiras' home statistics are sixth in the league, with 17 points earned in nine matches, +5=2-2, 17-8 goal difference. It should be noted that the loss of points in Sunday's match will not affect the leading position of the home team.

The Colorados also have a five-match unbeaten streak and a heroic home win over Colo-Colo in the return match of the Copa Sudamericana round of 16. In the championship, the Reds have drawn with Ceará, Athletico Paranaense and São Paulo, beating America 1-0. On the one hand, the statistics are not bad, but on the other hand, 6 points in 4 rounds is not much if you are fighting for the title. Not surprisingly, Inter have fallen to sixth place and are already six points behind leading Palmeiras. In case of defeat, Inter risks dropping out of the Libertadores zone, as two teams are three points behind at once: Flamengo and Bragantino. The Reds' away statistics are 4th in the league, with only one loss in 9 games on a goal difference of 9-7. Inter regularly plays low-scoring matches on the road.

As we have seen from the statistics, the teams regularly face off in low-scoring affairs, and in general, they are not super productive teams. We think this trend will continue in this clash, especially considering the density of matches and the future crazy calendar for both opponents. Both teams need to stay fresh, which means that rotation is inevitable, leading to a decrease in performance. As for the outcome, Palmeiras is the logical favorite, not only is the strongest team in good shape to put it mildly, but Verdão will also be the host in the upcoming meeting. Here are the betting options for the game: