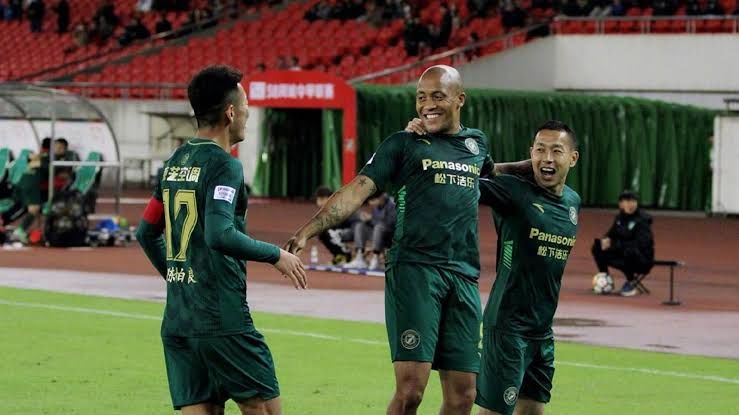 Hangzhou Greentown, who just defeated Shenzhen FC 2-0, are getting ready for their 14th matchday, in which they'll go up against Shanghai SIPG on the road at the Dalian Sports Center Stadium.

Despite being the underdogs, they are predicted to at least make Shanghai SIPG sweat for a victory and, while at it, put one goal past them after some impressive previous performances in their recent matches.

Even though they defeated Shenzhen 2-0, it wasn't exactly a remarkable performance from them to put on given that they were the hosts. Fortunately for them, Shenzhen FC failed to score, so they were able to collect all three points without much trouble.

The second goal, coming in from Ndiaye in the 72nd minute, sealed the deal for them as it was already evident that all three points were theirs for the taking at the Dalian Sports Center Stadium. Their opening goal came after a defender for Shenzhen FC deflected the ball in the 56th minute.

With another neutral home advantage when they host Hangzhou Greentown, they might put on a distinct and more energizing performance than the one they gave against Shenzhen FC and come out on top this time.

The guests, on the other hand, are yet another Super League team that has been excelling covertly, and their form has been nothing short of excellent.

They recently defeated Shenzhen FC 2-0, which is something they have in common with the hosts going into this game. In that match, they had 64% of possession in which 9 shots were on target on just 17 attempts with only two finding the net.

They have only lost once in their last five games, to Henan Jianye by a score of 1-0, and other than that, they have won three straight games that, coincidentally, have all ended with a score of 2-0. They have collected 10 points over those five games.

Presently ranked third in terms of defense strength after Shandong Taishan and Wuhan Three Towns, with only 9 goals allowed in 13 games. Another noteworthy fact is that they have kept a clean sheet for three straight games.

A team that defeated Shandong Taishan, and did so while maintaining a clean sheet (2-0), won't be intimidated easily on the road as they battle their way to victory against the hosts and repeat the same outcome.

In the previous nine meetings, Shanghai SIPG won six times, while Hangzhou Greentown won two, and one match ended in a draw.

Shanghai SIPG got off the hook easily in their match against Shenzhen FC, in which Shenzhen FC failed to score a single goal, and as a result, all three points headed their way.

The visitors have shown outstanding form for a team that is ranked mid-table, and unlike Shenzhen FC, they will be a difficult foe to subdue on the road, so the hosts will have a lot of difficulties and obstacles to overcome if they want to win this match.

As demonstrated in their match against Shandong Taishan, in which they were successful, Hangzhou Greentown is a team that can rise to the occasion and achieve unexpected results on any given day. They also have a very clear understanding of what it takes to triumph over strong teams in the Super League.

It's hard to imagine the visitors having any significant difficulties reaching the back of the net in this one given the huge variety of young talent on their bench eager to establish themselves.