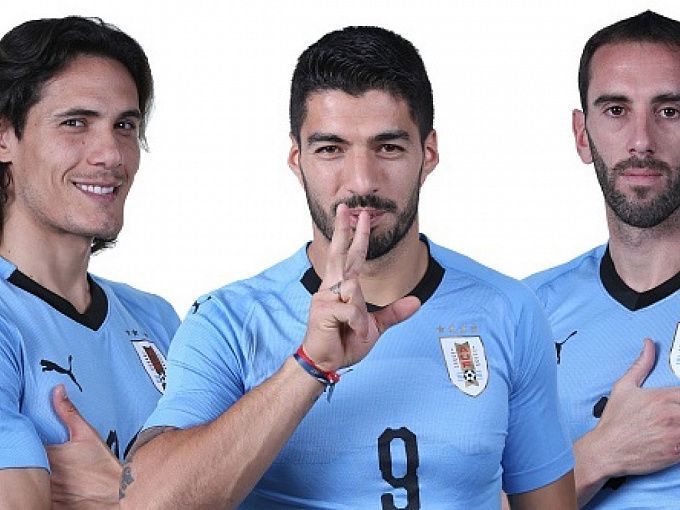 While the attention of the whole of Europe is focused on the championship of the Old World, over the ocean started another Copa America. Bookmakers call Brazil the clear favorite of the tournament. It is not surprising because the Five-Time World Championships are showing excellent football lately and will hold the second Copa America Cup in a row at home. But is their victory so clear? The Argentinians, led by Leo Messi, and the team of Uruguay, which again is full of experienced players and has Oscar Tabarez as the team coach, will definitely not agree with that.

The Uruguayan players have a great motivation

I have heard that there is a very high probability of victory in the upcoming tournament for the national team of Argentina. They say that Leo Messi will hold the last Copa America in his career, which means that in Brazil he will literally give it all. However, firstly, Messi is only 33, so he will surely play in Ecuador in 3 years. And secondly, why not Uruguay? The Heavenly Olympians have several iconic players who may well end up with the national team if not after the tournament in Brazil, then after the World Cup in Qatar next year.

First of all, Diego Godin, the record holder of the Uruguayan national team in terms of the number of games - the legendary defender played 141 games in the Sky-Blue shirt. Last season Godin spent in Cagliari, seemingly not the strongest club in Italy. Yes, the defender's career is on the wane, but the national team is not a club; the Copa America is a special tournament. Godin's vast short-term experience could be an X-factor for the Uruguayan team. Plus, he is paired with Jose Maria Jimenez, who remains one of the best in his position in world soccer, and won the Spanish championship with Atlético de Madrid last season.

The 34-year-old Martin Caceres, currently playing for Fiorentina, can also be singled out as a defender. The former Juventus Turin player, with his tremendous experience, will also surely help the Uruguayan national team to be reliable at its goal, which, incidentally, will be defended by Fernando Muslera, another veteran. The 34-year-old goalkeeper has played for Turkish Galatasaray since 2011, still an unqualified mainstay at the Istanbul club. Like Godin and Caceres, Muslera was part of the national team at the 2011 America's Cup, where the Uruguayans won gold medals for the last time so far.

Naturally, we cannot ignore the super duo in the attack: Both Edinson Cavani and Luis Suárez are fit and determined to repeat the success of 2011. Both were also part of the national team at the time, and Suarez even scored one of the goals in the final match against Paraguay. Suarez and Cavani are also the top scorers in the history of the national team. The first has 63 goals, the second has 51. Does anyone at this tournament have a better pair in their attack? Both forwards are also 34, and for them, the upcoming Copa America could also be their last.

Concluding the topic of the squad, it is worth saying a few words about the midfield. There are no experienced veterans, but there is Federico Valverde from Real Madrid, Jimenez's Atlético teammate Lucas Torreira, Rodrigo Bentancur from Juventus, the most talented Nahitan Nandez from Cagliari, and Matthias Vecino from Inter, who missed a lot of matches but has already recovered from injury. Well, the selection of players is at least as good as that of the main rivals.

Oscar Tabárez leads the Uriguayan team. The 74-year-old specialist has been working with the team since 2006, won the Copa America in 2011, reached the semifinals at the World Cup in South Africa in 2010, and in general has maintained the highest level of performance for many years. For example, at the last World Cup in Russia, the Uruguayans under Tabarez reached the quarterfinals, where they lost only to future winners of the trophy against France.

Why Brazil and Argentina won't win

It is no coincidence that the Brazilian team is considered by bookmakers as the favorite in the upcoming tournament. The team under the leadership of Tite really shows very high quality football: they won at home the Copa America in 2019 with assurance, and even after that they are performing very well. What to say, if on the eve of the Copa the Brazilians have four consecutive dry victories. Are they the favorites? Absolutely.

But the fact is that, firstly, Thiago Silva, the key player in Brazil's defense, is not at his best - it could have an impact at crucial moments. Secondly, it is unlikely to help the Brazilians to boycott the tournament, which they announced a week before its start, but then changed their decision. Not the best moment to prepare for the tournament. And, finally, the previous Copa America victory was just that, too - we should remember the VAR system failure in the semifinal with Argentina, 3 canceled goals of Uruguay's team in the quarterfinal with Peru, and the same Peruvians as Brazil's rivals in the final as a result. All in all, a victory with a twist, which will certainly give the Five-Time World Champions' opponents extra motivation in the upcoming tournament.

Why not Argentina? Well, it's simpler than that. The Argentinian team has been incredibly unlucky over and over again. The defeat in the finals of the 2014 World Cup and three losses in the finals of the Copa America. Winning the Youth World Cup and the Olympics is all Leo Messi has won with the national team. Why shouldn't the Argentinians stumble again? At least in the run-up to the upcoming tournament, Lionel Scaloni's team does not look unbeatable.

The Uruguayan team will start the 2021 Copa America in Group A. Argentina, Chile, Paraguay and Bolivia are among the opponents. A strong quartet. However, 4 teams out of 5 qualify for the playoffs, so all favorites are unlikely to have problems with that. Further, the playoff grid at the Copa America is arranged so that the first two teams from each group are placed in the same part of the grid. That means that Uruguay, if it finishes first or second in the group stage, will very probably play against a weak team from Group B, but in the semifinals, it will most probably play against one of the best teams in its quintet - Argentina, and maybe Chile. The important thing here is that Uruguay will start in the semifinals in a really difficult match-up. Can Oscar Tabarez's very experienced team play the two games, the 1/2 finals and the final, at the highest level? Absolutely! And that's what's needed. Uruguay can crawl all the way to the semifinals, even on one foot.

Prediction - the Uruguayan team will win the 2021 America's Cup. With odds above eight, how can we not take it?