Brazil vs Colombia: Brazil seems to be unstoppable! 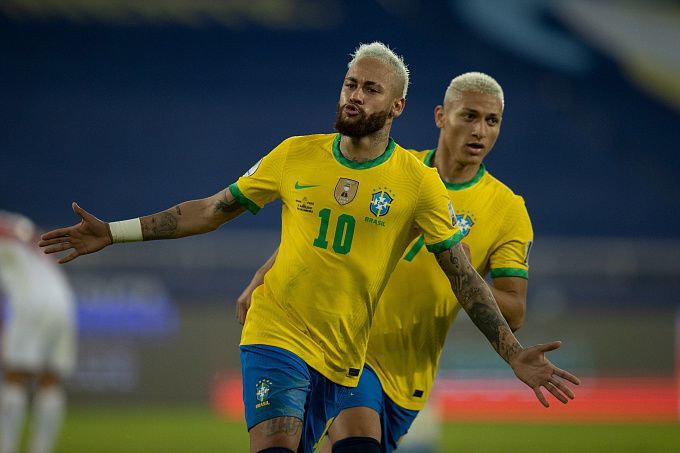 The last two face-offs between the Brazilians and Colombians ended in a draw. Will the opponents be able to determine the winner in the upcoming confrontation? Our prediction: the Brazilians will win easily this time!

The Brazilian national team continues to show phenomenal results. The last time the Yellow and Green lost points in official matches was at the 2019 Copa America, playing Venezuela 0-0 in the group stage of the tournament, which did not prevent them from eventually winning the trophy. In qualifying for the 2022 World Cup, Tite's men won six straight by a combined score of 16-2, nearly guaranteeing their entry to the final part of the competition, although only the opening stretch of qualification had passed. At the 2021 Copa America, the Brazilians beat Venezuela and Peru 3-0 and 4-0, respectively, which also allows them to lead in the standings.

Colombia is one of the most curious teams on the South American continent. The Colombians are one of the most skillful and experienced teams, but they cannot achieve anything significant. Yes, they qualified for the last two World Cups, but they are at risk of not qualifying for the 2022 World Cup, as they have only eight points in their opening six rounds and sit fifth in the standings. The Colombians started the World Cup in good health, beating Ecuador 1-0, but then a draw against Venezuela and a 0-0 and 1-2 defeat against Peru, respectively, which dropped them to second place in Group B, with the competitors having a game in hand.

The Colombian team was able to share points with the Brazilians in the last two head-to-head encounters, playing a draw, but those games were two and four years ago, so now we see a very different pentacampiones, who have won the last 12 consecutive official games with a total score of 33-3. Crazy figure! The Colombians have a decent roster, but they have nothing to show for it, especially against such a powerful opponent. As a result, we are forced to bet on Brazil's victory at odds of about 1.49.

Colombia has historically played poorly against Brazil offensively. The two sides have played 28 face-offs in their history, with the Colombians scoring just 15 goals (0.54 goals per game average), which is abysmal for such a long career. Moreover, in the last 12 official meetings, Tite's charges have conceded only three goals (0.25 average per game), which minimizes the chances of the visitors' offense to be productive at all. On this basis, the best option for the forecast seems to be an individual total of Colombia less than 2.5 goals at odds close to 1.01.

Neymar continues to walk elegantly through all the tournaments in which Brazil's national team is playing. In qualifying for the World Cup in Qatar, the PSG forward has already scored five goals in four games, and in the Copa America 2021, he scored twice in two games. To be even more accurate, in the last four games for his national team he scored four goals, and he scored once in each match. In such a situation it is worth looking at a bet on Neymar's goal with odds of about 4.0.