Brazil vs Peru: are the odds changing for Peru? 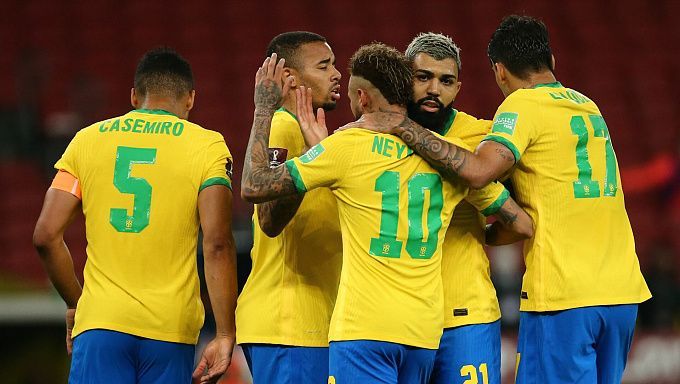 The first match of the semifinals of Copa America 2021 will be held in Rio de Janeiro. For this game, the Brazilian team will face the team from Peru. At the current tournament, they have already once played once, at the very beginning of the group stage where the Brazilians defeated the Incas with a score of 4-0. Do you think this will happen again, or this time the Peruvians will be able to beat the most titled team on the planet?

Brazil's unbeaten streak has now lasted 12 matches, beginning on November 19, 2019, against Argentina. Since then, the Brazilians and the Argentinians have not played again, perhaps the two strongest teams in South America will now cross paths in the final of the Copa. In the quarterfinals of the tournament, Brazil was stronger, the fate of the match was decided by a single goal scored in the 46th minute. Two minutes later Gabriel Jesus was given the red card for a serious foul. And on minute 62, a goal by Chilean Vargas was not counted due to offside. In general, according to statistics, we cannot say that the Chilean team looked worse than its opponent, but do not forget that almost the entire second half, the Pentacampeones played with fewer players.

The Peruvian team has played against the Brazilians probably more often than any other team in the last couple of seasons. Since the last Copa two years ago, Brazil and Peru met five times, of course, with the Pentacampeones having the upper hand. It should be noted that Peru is attempting to repeat what they did during the last Copa America where they made it to the finals two years ago.  After losing to Brazil, Peru has won twice and drawn twice. Peru defeated Paraguay in the quarterfinals thanks to a better penalty shootout.

For Brazil, the Peruvian team is like an open book, which gives them a great advantage. Not only that the Brazilian team is doing great in the championship, despite the mediocre match against the Chileans, but also the championship itself is played in Brazil. After the 3-3 match against Paraguay, the Peruvian coaching staff will probably pay more attention to defense. One of the main forwards of the Brazilian national team will not play. Here are the following odds for the game: W1 for 1.225, TO (2.5) for 1.66, Both Teams To Score - No for 1.571.