Chile vs Paraguay: The Chileans will continue their success in the Copa America 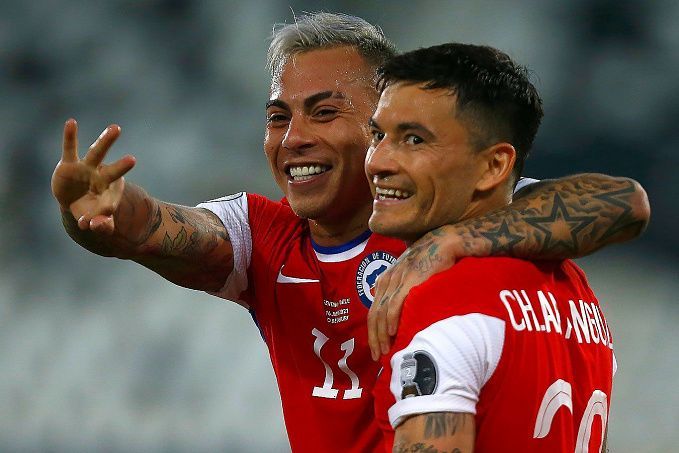 The Paraguayan players beat Chile in their last two head-to-head encounters with a combined score of 5-1. Will Eduardo Berizzo's men win again? Our prediction: this time the Chileans will be closer to victory!

For Chile, the Copa America is their favorite tournament, having won two trophies in the last decade. Unfortunately, in qualifying for the World Cup the Reds have not shone for a long time so they missed the 2018 World Cup in Russia and now risk missing the 2022 World Cup in Qatar, finishing in seventh place out of ten teams in the qualifiers, but in the Copa in Chile, all is going very well. Martin Lasarte's charges have already managed to share points with Argentina and Uruguay, playing with the same score - 1-1, and won against Bolivia - 1-0, which now allows them to take second place in the standings of Group A.

The Paraguayan team is going through a difficult time. They haven't played a World Cup in a long time and risk missing the 2022 World Cup again, finishing only sixth in the qualifying group with just one win in their opening six rounds. In Copa America, they are not delighted either, although they started the current edition of the tournament with a 3-1 victory over Bolivia, the very next game was followed by a 0-1 defeat by Argentina. Yes, Paraguay is now in third place in Group A and will surely make the playoffs, but their chances of global success in the tournament are low.

Chile has a number of serious problems, including the injury of Alexis Sanchez, but Copa America is a special tournament for them, where they show good results regardless of the circumstances. This is also the case now, as they did not suffer a single defeat in the three initial meetings, while the Paraguayans have already had a taste of failure in two games. On this basis, we should bet on the victory of the Chilean team at odds of about 2.67.

We can hardly expect a goal extravaganza from the upcoming battle. The Chileans were left without their main star in the attack, so now have to pay even more attention to the defense, counting on rare forays into the attack. That's how Martin Lasarte's team will try to play now, and the Paraguayans do not have many opportunities in the attack, so we will see a cautious and defensive battle. That's why we'll see a cautious and defensive game. Therefore, the best option for our forecast is under (2.5) goals with the odds close to 1.50.

Eduardo Vargas is the best player in the Chilean team after the injury of Alexis Sanchez. The experienced player is doing well in this status at the Copa America, wherein three meetings he has already scored two goals, while the rest of the team together scored only one goal. Solid involvement in the overall team success! Yes, at the club level this 31-year-old player doesn't have any prohibitive statistics, but in the national team he transforms, so it is worth looking at the bet on Eduardo Vargas' goal with the odds of about 3.30.