Deportivo Táchira vs Palmeiras: Bet on the Brazilians in a high-scoring match 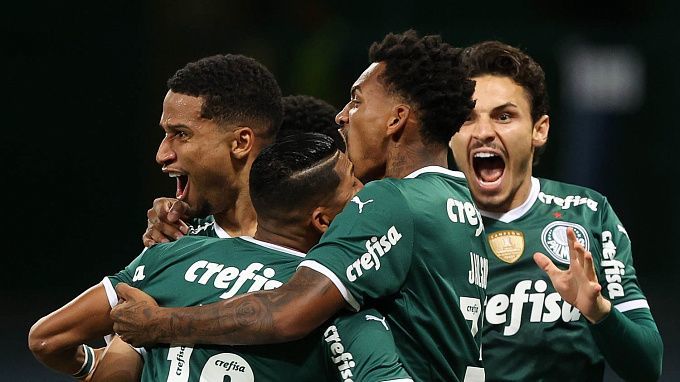 The Venezuelan team Deportivo Táchira will face Brazilian Palmeiras in round 1 of the Copa Libertadores. Despite the home advantage, the bookmakers favor the Brazilians. Moreover, they have little doubt that the team from São Paulo will take home the three points from Venezuela.

In March and early April, Deportivo Táchira played five official matches, all within the Venezuelan Primera Division. During this period, the future home team won three times with one draw and one defeat by UCV. Not too bad results, which allow the hosts-to-be sit second in the Venezuelan championship standings, with an asset of 13 points. Overall, Deportivo Táchira has four wins in six games with one draw and one loss, and a goal difference of 11-5. The home stats are second in the division, +2=1-0, 6-1 goal difference.

Palmeiras go to visit Deportivo, having won another Paulista championship. The first final against São Paulo held at Morumbi saw the Greens lose 1-3, only to beat the rival 4-0 in the return game, thanks to goals from Danilo, Ze Rafael and Veiga. Clearly, Palmeiras is in great athletic form. There's no doubt that the Paulista champion is going to Venezuela solely for the three points.

Deportivo Táchira and Palmeiras have played four times against each other, two matches each in Venezuela and Brazil, all within Copa Libertadores. Regardless of the home advantage, it was the team from Brazil who won all the matches, and both away games for Palmeiras ended via TO (2.5).

Palmeiras is quite a prolific team: their last three games saw Total Over (2.5), and in the last six games there was Total Over (1.5). Both of Paulista final matches went over 3.5. As written above, Palmeiras is in good shape, going to Venezuela to get three points. And we hope that the starting match of the strongest team in South America will be productive. The first bet: W2+TO (1.5) for 1.78 at the line of 1xbet.

Deportivo Táchira has scored in every home game in 2022: three against Zulia, one against Puerto Cabello and two against Deportivo Lara. It is very likely that the Venezuelans will manage to score in the first match of the Copa Libertadores group stage. But that will hardly interfere with the plans of Palmeiras, who will definitely be able to score two goals in San Cristobal. Correct score 1-2 for 8.00 at 22bet.