Chelsea vs Tottenham: Will Conte beat his former club on the third attempt? 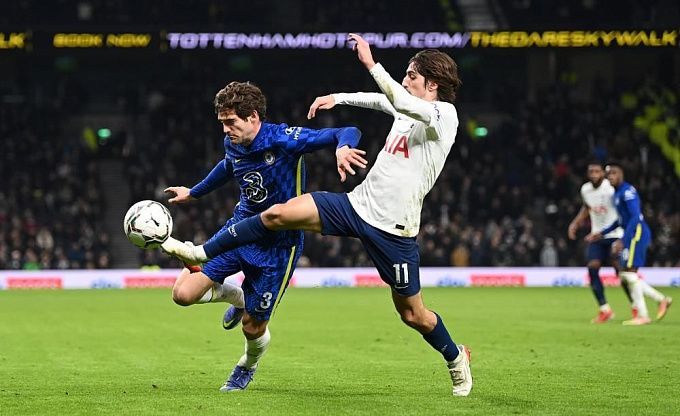 The central match of Matchday 23 will be the encounter between Chelsea and Tottenham. They have already met in a two-match clash in the English League Cup semi-finals, the Blues winning 3-0. How will it be this time? Will Conte get revenge on his former team at the third attempt?

Chelsea finally dropped out of the championship race — no wins in the last four games in the EPL. During this time, there was a 2-2 draw with Liverpool, two 1-1 draws with Brighton and a 0-1 defeat by Man City. Chelsea failed a crash test at the most crucial period of the season. And the gap from City is now 12 points, with the Londoners having played one more match than the Citizens. Experts predict that the championship race for the Blues is over. Now their priority is the English League Cup and the club's World Cup.

Tottenham under Antonio Conte is impressive. Conte managed to set a record for the Spurs — 9 matches without losses. Moreover, Antonio picked up the team as the season progressed and managed to build up the soccer he wants to see in a short time. During this period, his players nearly outplayed Liverpool (2-2), beat Watford in the last minute (1-0), took out Crystal Palace (3-0) and managed to pull out a victory over Leicester (3-2), scoring two goals in the second half.

The Spurs have shown phenomenal resilience under Antonio Conte, although in some games they physically sag and go up against the wall. Nevertheless, the unbeaten streak of 9 games will not be crossed out. Thanks to such success, the Spurs are third in points lost and fifth in the table. Still, we should not forget that Tottenham was knocked out by Chelsea in the League Cup.

The opponents have played a total of 172 official face-offs Chelsea are ahead by a score of 76-54. This season, the Blues managed to defeat Spurs 3-0. At the time Nuno Espirito Santo was at the helm of Tottenham. And then they were drawn in the English League Cup semi-finals. Then Thomas Tuchel's players won both times, 2-0 and 1-0, respectively.

We believe that the game will be cautious, as both teams have played a match this week. And they are in a bit worn out state, so they will value their chances and play cautiously and close. Our first prediction for the match is Total Under (2.5) goals for 1.90 from Bet365.

We also think that Thomas Tuchel will disappoint Antonio Conte again, as he knows how to counter the Italian coach. Betway gives odds of 1.72 for a Chelsea win.

In conclusion, we believe that we will not see goals in both halves due to the overly tense and at the same time cautious fight on the field. 1xbet gives odds of 2.02 for this betting option.