Leeds United F.C. vs Arsenal F.C.: the Gunners Will Stay at Top-4 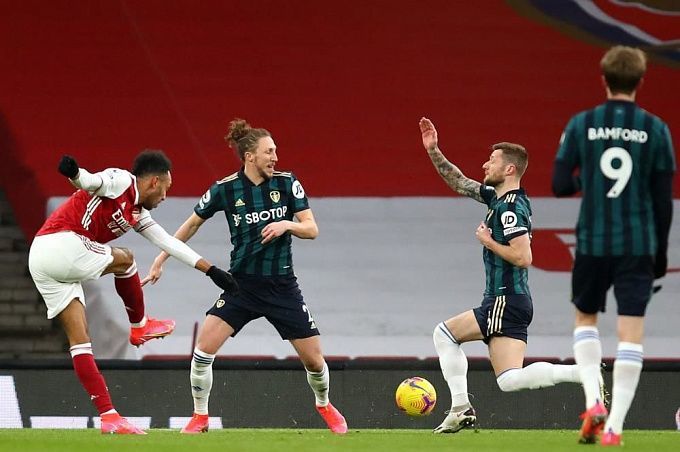 Leeds suffered the humiliating 0:7 defeat this midweek under the head coach Marcelo Bielsa from Man City. Next up is a home match with Arsenal. Will the Peacocks cope, or have they lost control? Several betting options are available!

Leeds has a complicated schedule right now. The Whites lost 2:3 to Chelsea in the last minutes of the away match. Then there was a humiliating 0:7 blow-out from Man City. Now it's the turn of a home match with another top 4 clubs. The Peacocks beat Crystal Palace (1:0), scoring the only goal from the penalty spot in the 94th minute. Then they sealed a 2:2 draw in a game with Brentford in the 95th minute. Patrick Bamford came back just in time.

Nevertheless, Leeds is still in 16th place, 5 points behind the relegation zone, while Burnley has two games in hand. The Peacocks' lineup is still incomplete because of the injured. Marcelo Bielsa's things turn ugly.

It finally happened. Arsenal returned to their favourite fourth place in the Premier League. The Gunners beat 2:0 West Ham, their competitor in the fight for the top 4. Earlier, the capital club defeated Southampton (3:0). Is this the answer to two embarrassing losses from Man United and Everton? Let's see whether the Gunners can stick in their favourite position. Now we are waiting for the be top matches.

With such a large number of losses as Leeds has now, it is impossible to believe in the magic of Bielsa, especially after 0:7 from City. The current Arsenal is good because it wins where it simply must win. We also believe that the game will be productive because Leeds will be Leeds. Arsenal is ready to punish the Whites for their exposed rears.

Leeds can create a suspenseful finish, which we saw in the matches with Chelsea, Brentford and Crystal Palace when the winner was revealed in compensated time. Man City scored their last seventh goal in the 78th minute. The following betting options are available: